The Red Bull Joyride is one of the most prestigious events of the Crankworx Whistler Festival since 2004. The best slopestyle riders in the world compete and risk their lives in search of glory in front of thousands of fans shouting their names and cheering for them. This iconic event has helped certain riders make a name for themselves and launched their professional careers.

This year’s Joyride was special – and chaotic – as it was the closure event of the Crankworx World Tour which consisted of three stops: Rotorua, New Zealand; Les 2 Alpes, France; and Whistler, BC, Canada. With heavy rains on Saturday afternoon, the organization decided to postpone the event for Sunday morning. The whole weekend was filled with injuries and bad luck for most of the big names, but others performed really well.

The finals went off and all-time crowd favorite Brandon Semenuk dethroned Brett Rheeder from his Crankworx domination. Anyhow, Rheeder walked away with the overall title for Crankworx Slopestyle, but still could not achieve the Triple Crown.

Here are some film photos from Sunday’s action at The Boneyard.

Two-time champion Cam Zink drops in with a perfectly executed flat-drop backflip. Unfortunately, all his hopes of winning Crankworx for the third time vanished when he could not land a superman seat-grab backflip on the first big double after the SRAM shark fin. He had a bad day but he is still a legend of the sport and a rider that we will always look up to. #sensusgrips

“This year’s Crankworx kept going right along with a ridiculous level of progression. The top couple guys are always pushing it so hard, but this year’s talent pool was so deep that it is now actually a honor to even be a part of Slopestyle Finals. I still feel like I have what it takes to win, but the run I would have to go for just keeps having a slimmer and slimmer chance of being landed. It is for everyone: even the winner…” – Cameron Zink

Anthony Messere did a hell of a run that could have probably put him on the podium if he would have landed that backflip tailwhip out of the whale-tail on his first run. He looked confident starting his second run, but it would soon end after coming in too dumped from a 360 barspin off the up-box feature at the beginning of the course.

It seemed that bad luck was all over Crankworx this year for some of the riders that were about to compete at Joyride. 2015 Colorado Freeride Festival champion and all around shredder Carson Storch broke his collarbone during practice because his cable got caught on his stem, ejecting him straight to the ground. He had to sit down and watch his friends compete instead.

Anton Thelander was another rider plagued with bad luck. On his final practice run, he broke his collarbone and missed Joyride for the second year in a row.

“I was super excited to compete in Joyride again this year since 2013 was one of the coolest experiences I’ve ever had. Missing out last year due to a collarbone injury made me hungry. I was having a great time on the course but on my last practice run before the contest, I flipped the bonerlog a little too deep and didn’t brake enough for the next hip where I did a flatspin and kind of missed the landing… That was it. Broken collarbone again.” – Anton Thelander

“The dawning forecast going into Crankworx Joyride 2015 seemed like an absolute guarantee for disappoint. Leading up to the event, the clouds darkened everyday. Waking up to the sun poking out Saturday morning, I thought we dodged a bullet; just like the 2 years prior. Finals day resembled every other; dropping into the last few practice laps, you start to understand that your run is only moments away. When I heard the first rider drop on the course I began to gather my things and head up; I took one step out of the SRAM trailer and heard the beating of a million rain drops on the tent, instantly realizing that sound identifies the end of our day and a postponed event. This meant another day of anxiety and another bad sleep. Sunday morning we rolled up to the course; with the storm past, we were left with perfect conditions. Dropping in for those last few practice runs again, it seemed as if we just picked up from where we left off.” – Brandon Semenuk

All eyes were on Brett Rheeder, the C3 Project rider who could have made history in Whistler, BC, Canada by winning the first ever Crankworx Triple Crown, as he had previously won in Rotorua, New Zealand and Les 2 Alpes, France.

Brett Rheeder looking for gold on his second run. Flat-drop backflip can as if it was easy to do. Unfortunately, he crashed in both of his runs trying to land a backflip double-tailwhip. As mentioned before, he was one of the handful riders that did not have quite his best day competing, but in the end, he took home the Crankworx World Tour Slopestyle title. It still was a pretty decent way to walk away.

Canadian Paul Genovese minutes before the big show. Although he did a pretty solid first run, he had more in store. Sadly his second run did not go as planned and ending up 13th. Healing vibes to Paul as he broke his femur at The Backwoods, Logan Peat’s invitational jam last weekend.

Logan Peat trying to gain speed out of the SRAM shark fin after stomping an impressive 720 on the jump before. He ended up rounding the top 5.

Anthony Messere doing his classic signature move, a 360 flatspin as smooth as a freshly packed lip.

“Red Bull Joyride 2015 was an extremely memorable one for myself, and despite the obvious weather setbacks I’m thrilled with the way it unfolded in the end. The changes and enhancements we implemented to the course this year made for a smooth and generally forgiving line to ride, which is exactly what we were trying to accomplish. The rider consensus was positive, which is hugely gratifying for us builders and I think the level of riding we saw in practice and the contest was proof of that. We at Joyride Bike Parks are excited to improve the course for next year. Thanks to the riders for putting on such a good show!” – Dustin Gilding

The silent assassin Brandon Semenuk on his way to first place for the third year in a row and his fourth Red Bull Joyride win. 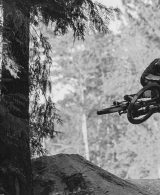 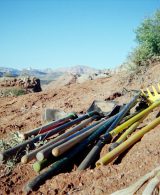