Braden and Ben Schleith have lived in Kelowna, BC their entire lives and have seen the life and death of the Cannan jumps. It is always sad to see a spot getting plowed, but they took advantage of living on an acreage and started building jumps on their backyard as soon as they lost the place where they had fun playing with their bikes surrounded by friends.

“The Cannan jumps were some of our local trails a few minutes away from our house. They originated back in 2010, first created by our friends Micheal Epp and Brett Rhine. At that time, it was just a little 4 pack. I guess you could say that they got over it, and moved on from that spot. My brother, and a couple of our buddies, realized how sick of a spot it actually was, and decided to continue digging there.” – Braden Schleith

“With years of work, Cannan had turned into the most fun set that I have rode to this day. At the beginning of 2014, Ben and Harrison Mendel had the idea of expanding Cannan into another jump line. The project was put on hold when we were notified that the jumps had two weeks to live. This was definitely some hard news to take in. As months passed, the jumps remained there. We were definitely fortunate for that, so we took the opportunity to continue stacking the second line. By last fall, the line was almost complete.” – Braden Schleith

“Unfortunately, the news broke out one afternoon last November. I remember I was just sitting in school like any other day when I saw a photo that Tom had just sent me. I looked at it and it was just flat ground where our jumps used to be. Cannan was plowed. This was for sure one of the roughest days of my life, but that is just the way it goes sometimes. Especially in Kelowna, it seems like as soon as a spot gets really awesome it gets torn down.” – Ben Schleith

“With the loss of Cannan, Ben and I are even more motivated to make the yard as sick as it can be.” – Braden Schleith 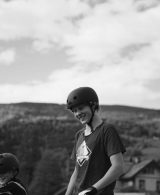