In early November last year, I flew to San Diego, California and meet up with my good friend Jake Kinney to ride as many dirt jump spots as possible and shoot the last images for my second book There Is No Need To Be Afraid Of The Dark.

We spent a week driving around South California on his brand new van, listening to hardcore music and drinking good coffee on the road in search of the best trails.

We called it The Finisher Trip.

Here are our bikes loaded in the van. What you don’t see here is the air mattress that is behind them, in which I had to sleep in, and inflate 2-3 times a night, because it had a small blowout that kept leaving me laying on the floor every time. We didn’t have duct tape, so instead, I tried to fix it with stickers, but it didn’t work. Now that I think about it, we could have bought duct tape and fix it, but I don’t know why we didn’t do that. Jake slept on his hammock that was hanging from one side to another on the back of the van.

Jake at the famous Huntington Beach pier on Main St. While we were there, I was hoping to bump into Ed Templeton and his Leica, but that didn’t happen.

I didn’t ride at Wetlands. I didn’t want to try and ride in front of the locals and legends like Kris Fox, Nathan Sykes and Anthony Napolitan in case I didn’t clear the jumps and looked bad while trying the line. Jake kept telling me that I should be riding, but I didn’t want to listen. I wasn’t going to ride that day. A few weeks later I thought about it and realized that I could have easily jumped the whole line.

Sheep Hills – a legendary dirt jump spot from way back in the day. I think that is where dirt jump BMX started. It was cool to check it out and spend some time there riding and shooting with Jake, but there are better spots to ride now. Although, with all the pedaling that you have to do between the jumps, it was definitely a good cardio work out.

When I think of Riverside, for some reason, I see myself 10 years ago watching BMX dirt jump videos and Vans ads on magazines of riders like Cory Nastazio, Luke Parslow, TJ Ellis or Ryan Guettler. When I saw that sign, I told Jake to stop the van so I could jump out and take a photo in the middle of traffic. We were on our way to Milestone MX park to ride the trails that Mike Saavedra had recently re-built.

We parked the van in a nice neighborhood of Lake Forest, close to Regency trails, and rode there the next morning. Shout out to John Brewton for letting us shower and stay at his place that night.

Here is Jake posing in front of the Oakley headquarters in Foothill Ranch. I had seen this place on the Internet before but never thought that I will be able to visit it. We got to ride the Dirt Lab with Hucker, Dylan Stark, John, and a few others. Well, I only rode the pump track and smaller lines, because again, I didn’t want to try to ride the big line in front of Hucker and those guys, maybe because I was a bit scared to hit those jumps too. I don’t know, that’s just me.

Jake taking a break at Olive Groove trails, a nice spot in a location that I can’t remember. The place was cool and the locals were nice. We had fun.

Water dripping at the second to last lip in F.O.D., another place that I didn’t think I would ever visit, let alone ride. Joey Cordova and TJ Ellis sessioned with us that evening, too.

One of the highlights of the trip was seeing one of my favorite metalcore bands play live, The Devil Wears Prada. Before I landed in San Diego, Jake had previously told me that we were going to go to a Silent Planet show that same night, and I thought that was cool, but what I didn’t know is that TDWP was actually the headliner of the tour. Right before we got to the show, he asked me something random about TDWP, and then he told me the truth. I couldn’t believe it. This is Mike Hranica in front of my shitty Lomography disposable film camera.

“There is no fear in love, but perfect love drives out fear. Because fear has to do with punishment, the one who fears is not made perfect in love.” – 1 John 4:18 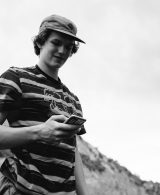 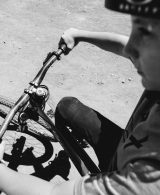