I. Practice: “Death may be the greatest of all human blessings.”

British rider Sam Reynolds attended Rampage for the first time. He brought a good crew of friends to help him dig that made the morning and afternoon drives to the site more fun.

Andreu and Tina Dixson talking earlier in the day.

“I knew it. I knew I was going to crash. The jump is too small. Everyone is going deep. I told them to change it, that it needed to be bigger, but they didn’t.” Andreu told us while we were walking up to the riders tent. “It sucks because everyone wants to do backflips and I can not push my limits… I am over it.” That afternoon he hurt his wrist, barely being able to move his hand and his tailbone which left him sore for the next days.

Aggy won practice. Higher than anyone else with effortless style.

II. Qualifying: “The hour of departure has arrived, and we go our separate ways, I to die, and you to live. Which of these two is better only God knows.”

R-Dog trying to pay attention to what Todd was saying wondering why there were so many random people and when was lunch.

Zink’s scars after a long week of hard work.

Josh Bender. A man who pushed the boundaries of Freeride Mountain biking in the late 90’s hucking off cliffs. Now he is one of the main judges of Rampage.

Kyle Jameson on the YT kicker seconds before finishing up his first run that will put him on 14th place, missing finals by 3 spots.

Bas Van Steenbergen line was tech and fast. He put together a clean run and made it to the finals.

The Italian hero Nick Pescetto above the Canyon Gap, the same jump that put him out last year with an injured wrist. This year he ended up 17th and healthy, ready for his next adventure in Indonesia.

T-Mac crushed his drop called ‘El Presidente’ – which is his new favorite drink from Chili’s. The pressure was real. Before going for it, his brother Cam and longtime friend and digger A-Rev were helping him judge speed. After a bunch of run-in’s, he went for it and ended up qualifying 2nd. That same day in the afternoon he suffered a bad crash on a step-down, just after that drop, putting him on a hospital bed for the next days with a heavy concussion and bruised lungs.

Aggy about to win qualies once again. He rode insanely good and was more than ready for the finals.

III. Finals: “I’ve reached the point where I hardly care whether I live or die. The world will keep on turning without me, I can’t do anything to change events anyway.”

Zink was one of the first riders to drop in. He had just made a hell of a run, including last year’s 360 drop and a huge backflip step-down at the bottom part putting him on the first spot for a few minutes. Although, his happiness will soon end as the next riders started to come, and a few to go down like his longtime friend and freeride legend Paul Basagoitia.

No matter what place Zink finishes. No matter what he does. He will always be a hero and a dude to look up to for us. We suggest you watch his new documentary movie ‘Reach For The Sky’ by Ryan Cleek.

Brett Rheeder at the RZR jump on his first run where we think he was supposed to do a backflip-no hands to can, but somehow, he could only do a straight flip. Unfortunately, he couldn’t improve his score on his second run as he crashed and ended up finishing 13th, missing the 2015 FMB World Tour overall title.

Trek C3’s project manager Andrew Shandro covering his face from the dust while Paul Bas was being airlifted to the hospital in St. George, Utah. Click here to support or donate and help Paul and his family.

Jordie Lunn dug for Tom Van Steenbergen along with Noah Brousseau all week long. They had a dialed line, you can tell they worked hard, but Tom injured himself during practice so he was unable to compete.

Paris Gore waiting for the next rider to drop in.

The King of Slopestyle Brandon Semenuk showing everyone how a proper oppo-360 off a drop looks like on his first run.

On his second run, Brandon did a flat drop backflip-can that most of us couldn’t see. We are pretty sure everyone watching Rampage on TV saw that, but we wonder if the judges did. He ended up 4th and scored a Polaris RZR from his ‘People’s Choice Awards’ win.

As soon as last year’s champion Andreu Lacondeguy crossed the finish line, he was plagued with dozens of kids wanting to have their hats and t-shirts signed. He took his line from 2014, but improved it by 450ing the hip, and doing his signature 360-table on the RZR jump. With a score of 95.75, he couldn’t beat Sorge’s 96.50 score due to heavy winds on his second run… Which left him and Aggy on the top of the mountain unable to show the world what they were capable of.

People’s Choice Awards winner Brandon Semenuk sharing the podium with Sam Reynolds who did a superman over the Canyon Gap that was awarded as the Best Trick of Rampage. 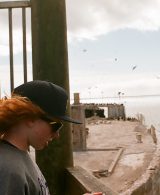 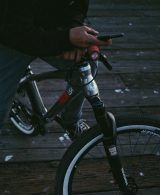