I am not a street rider, but I have always been a fan of Matt. I can’t remember the day that we met, but I guess that it was through our friend Vishneviy, nearly 5 years ago, when he was staying at my place for the first or second time. Before having the opportunity to meet Matt, I remember watching The Ten Commandments and Raised In The Streets videos by Justin Browne and gettin’ super stoked to ride street. At that time, I was riding with this sketchy painted Marzocchi DJ 2 fork that didn’t work too well, but I didn’t care at all because it looked like Macduff’s fork. Also, my brother and I were so stoked on those Dobermann frames that we almost ended up buying a pair.

One day, before going to sleep, I was laying on my bed and started thinking. Thinking about a lot of things. Somehow, between one of those thoughts, I came up with an idea: to shoot a complete B/W roll of film with MacDuff through the streets of Barcelona. It could be an interesting experience. I had never taken photos in the streets before, in fact, this whole photography thing is pretty new to me, but I wanted to give it a try. I messaged Matt and suggested my idea. We spent a week or so trying to figure it out, and right after Matt came back from an insane trip of Dirt Jump riding in South Africa, where he entered and won The Night Harvest contest and filmed for the up-coming Pure Darkness 2 video, we were already in the streets with our bikes, my camera and my lenses.

This is what I got from 2 different days shooting photos in Barcelona with the King of the Streets before he started filming for his new video.

We started off the day at the Forum Sea Walls. He tried to tuck the quarter six or seven times, but he wasn’t able to stretch his arms. So instead of getting more pissed about it, he did a clean and stylish toboggan.

Matt had this photo in his head before getting to the spot: “I want to air the whole thing and do a table or toboggan at the top of it.” And that is exactly what he did.

When we were on our way to have lunch at this kebab place, I saw this little cool ship at the end of the harbor. “Hey Matt, let’s go over there, I think that it could be a great photo.” I said. “What should I do here?” Matt asked. “Hmm, do a barspin.” And I clicked the shutter release button.

Back from lunch, and Matt was already going wild in the streets. Here you can see him barspining this sweet spot close to the beach. No big deal for him though.

To finish off the first day, we went to another famous spot called The Waves. There were a lot of skateboarders but between their runs, Matt was able to do a couple tricks over the handrail. The skaters even cheered him up for his moves.

A couple of days later and we were back in the streets. This time, Aidan Horn, Vishneviy and a couple more riders joined us along the way. We started at the top of Barcelona, close to the mountains, where this huge plaza with dozens of banks is.

While everyone was sessioning those banks, I saw these platforms surrounded by water and this bridge where I could stand still and shoot some photos. “Matt we should go there and see if we can come up with something. I have this photo in my head that I would like to try.” And this is what we got. A couple tailwhip shots from one platform to another.

We kept going down the plaza to ride a different spot. After 15 minutes riding around and trying a couple technical moves, Matt did a downside-whip for the boys. And also, Vishneviy did his first bunny hop oppo-bars, which is pictured below.

The day was coming to an end. We were all tired from riding non-stop, so we put all our bikes into a van and headed to the Forum Sea Walls again. But we didn’t last long. It was cloudy and freezing outside and I had just finished my roll of film, so we called it quits.

It was such an amazing experience to follow Matt around the city. Watching him ride in person was insane. His riding is so dialed that he can literally do whatever he wants on a bike. It was like watching one of those videos I mentioned before.

Thanks for the good times. 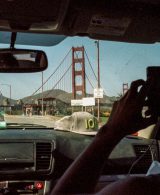 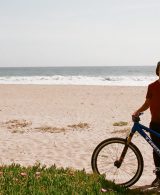