All I knew before this little interview was that he was good on a bike and had a dialed style, but now after reading his words, I found out that Nick apparently likes aliens, works as an arborist and used to skate.

That was an interesting read.

My name is Nick Tingren, I am 21 from North Vancouver, BC, Canada.

What do you do for a living?

I am currently working to become an arborist at a tree service company.

When I was like 16 I used to ride skateboards at a local park and I would always trade with other dudes to ride their bikes and eventually bought my own when I was 17.

Too many to count, a good one was at Wolf Mansion (RIP) for the Raptor party a few years back, way too many good times at that house.

Clint Reynolds and Tom Robinson would be a start, those dudes are just awesome when it comes to earning it with digging and being insanely smooth with riding.

I have had broken ribs, arm, semi separated shoulder, multiple concussions, broken fingers, rolled ankles and shinned myself way too many times. My family tries to tell me to quit and find something else.

Not really, if I’m scared to do something, most of the time people know it. I mean, the first 360 downside whips of the day scare me but otherwise not so much.

1. Getting a cover of a famous mountain-bike magazine.

3. Filming a full-length video part with the best film-makers.

Cover shot on BIKE mag would be insane but being in a full-length video part would be a dream come true.

My view of the MTB industry are pretty basic, I love the companies I deal with for the reason that I know and have met face to face with them. Not just some marketing dude in another country that I will never meet. When it comes to sponsorship within the industry I think it’s a joke, plain and simple. I have ridden for teams that have 50 kids getting deals or hooked up a little bit by companies that are claiming it as “sponsored”, when it’s like no kid you got a hook up and maybe flowed some free shit but in no way would I consider them “sponsored”. To me MTB needs to cut down on these “grassroots” programs and focus on trying to make the riders that do give your company its creditability and image some help cause at the end of the day they are the people that the kids are going to look up to. For that reason, only do I consider myself an Amateur MTB rider, not a professional. Read more.

Film a lot more web videos and maybe hit a few contests but try to focus more on media.

I’d like to take this opportunity to thank my sponsors Ian, Julian and Reece at Chromag, you guys kill it, Rob at Cariboo Brewing for always having the hook up, Josh at Dissent Labs for keeping my feet warm and Monica at Ryders Eyewear for keeping my goggles fresh! 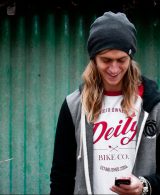 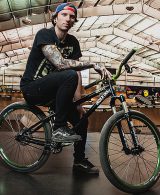