Terry Cox from College Cyclery supported the event once again. If you ever go to Sacramento, CA visit his bike shop, and if you are lucky, he will show you his rad warehouse.

“Sacrifice the lives of all I know they soon shall die. Their souls are damned to rot in Hell and keep the fire growing deep inside. Hell awaits…”

Jordie Lunn lacing up his Nike’s minutes before the first riding session.

“Dead flowers for a faceless dead. A city engulfed by the smell of the death. Bodies piled beneath the mist. Walking dead among the living. The world will bleed while horseman ride. Now that God has wept for Judas. Days are numbered find your grave. Forever trying to escape to hell.”

Makken was the first rider to test and ride the bigger and re-built course that Kyle Jameson, R-Dog, Jeff Herb and the rest of the locals had been working on during the winter. Unfortunately, he cased the medium jump of the line and went over the bars, injuring his ankle and knee.

This is what might happen to your helmet if you crash at FEST.

Jeff Herb is still recovering from a crash that he suffered at Rampage 2015, but that didn’t stop him to help his friends dig and organize this year’s CruzFest. Also, he has been working on his new company called Dark Industries, a darker than dark and soon to be announced alternative MTB brand.

Nico Vink, Sam Reynolds, Adolf Silva and Brandon Semenuk catching their breath while hiking up their bikes to the top.

Freelifer Nick Pescetto couldn’t fly to California until the very last two days of CruzFest because he had been sick on a balinese hospital room due to an unknown disease.

Cam Zink couldn’t ride due to an injured shoulder, but he was more than happy to watch his buddies shred.

Spanish TV commercial actor and all around extreme sports rider Topo made it to CruzFest, as he is filming the riding and lifestyle of his longtime friend Andreu Lacondeguy during a 2 month trip around the USA and Canada. Check out his extreme shooting skills below:

When Andreu wasn’t riding with his moto, he was spinning jumps on his 26″ downhill bike, like this 450 over the second and biggest hip of the course.

Nico Vink has spent the off-season recovering from his leg injury, building trails and jumps between Belgium and France and getting used to his big bike again. It was great to see him flowing around.

Even if Nico Vink hasn’t spent a lot of time on his big bike this winter, you can tell that he wasn’t scared to hit big jumps for the first time in months.

The legendary filmmaker Clay Porter captured all the action on video with the help of Chris Seager and John Reynolds. Stay up for the highlights edit coming soon on festseries.com

Topo borrowed Andreu’s bike and rode the first two hips of the course.

Brandon Semenuk laying down a stylish one-handed 360 on the step up as seen on his Utah segment from Revel In The Chaos.

Sam Reynolds won Best Line, but he could have also won Best Trick with this impressive superman nothing. Instead, Dusty Wygle ended up winning with a massive frontflip on the step-up.

Andreu Lacondeguy was awarded by the FEST crew as the 2016 Cruz King. 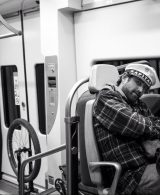 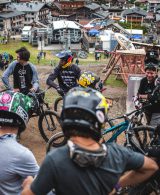