The Shire jam took place a couple weeks ago and our family member Daniel Fleury was able to go. He rode and had fun at the trails and then took some photos with his film camera.

Local rider Ian Carpenter talks about the insanely fun looking trails that he built with his friends and how the jam went. 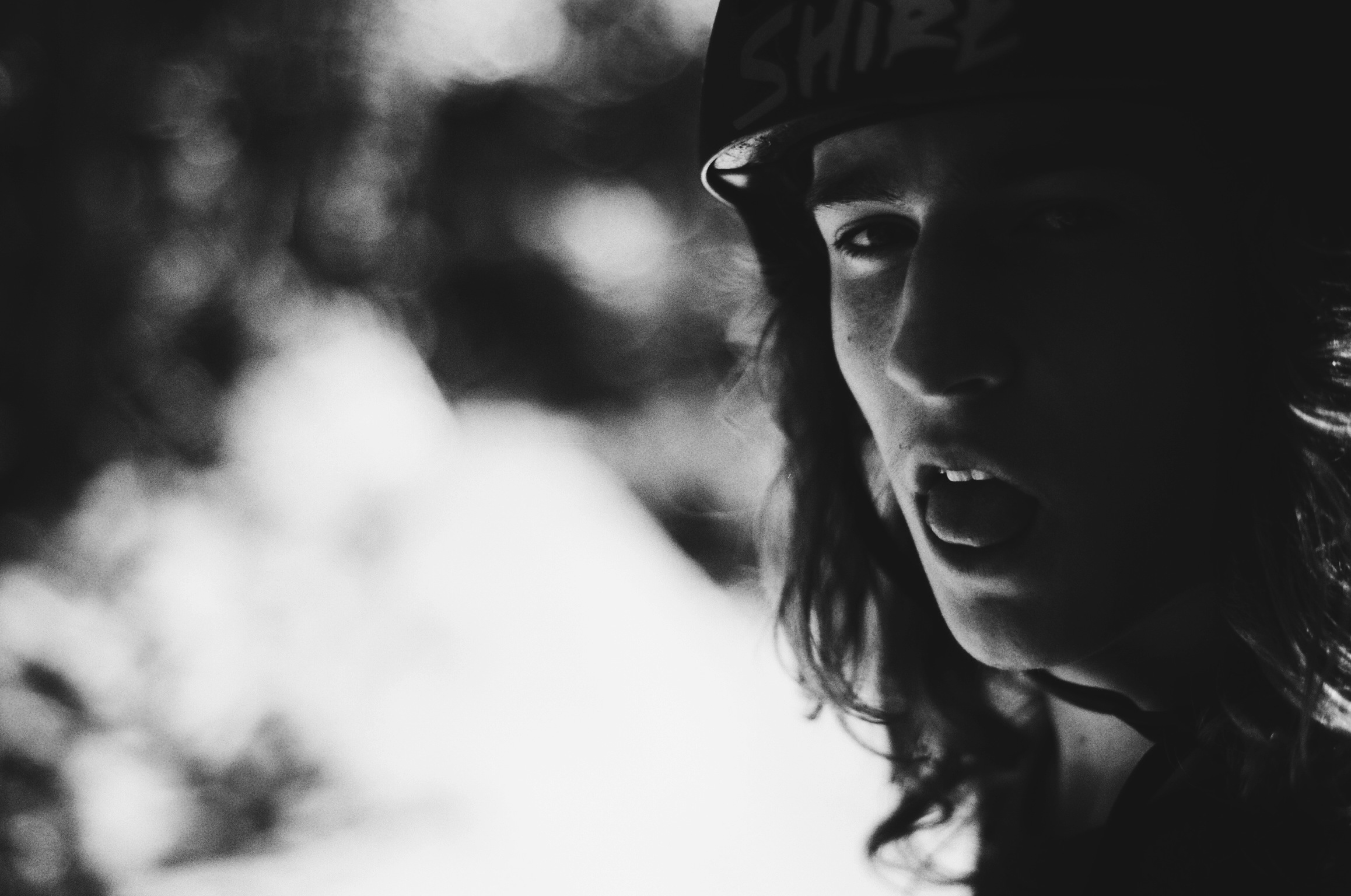 “We started The Shire like almost 3 years ago now I think, damn time flies. When we first dug the place we hit mad water tables. The first real summer/spring at the jumps, I’m pretty sure that we dug more than we rode, due to flat bottoms being like quick sand (laughs). It was like month and a half of just digging and drainage, then on top of that some of the jumps didn’t work so we had to scoot lips in and pull lands back, and all that fun stuff. Every year we try to have at least 2 jams. We usually pick each jam date two months to a month in advance so everyone can get those days off work. Once we have picked a date and have gotten the word out, it’s all set in stone. For the most part we pick the date based on when we break ground again resurfacing the jumps and fixing any blow outs from winter, that way we all have an end game we have to get too (encouragement to get your ass in the woods and dig). We have the occasional asshole that ditches his bike every run and thinks he’s the shit, so we kick those dicks out. Everyone else is mad stoked on the place and we hear nothing but positive things.” – Ian Carpenter 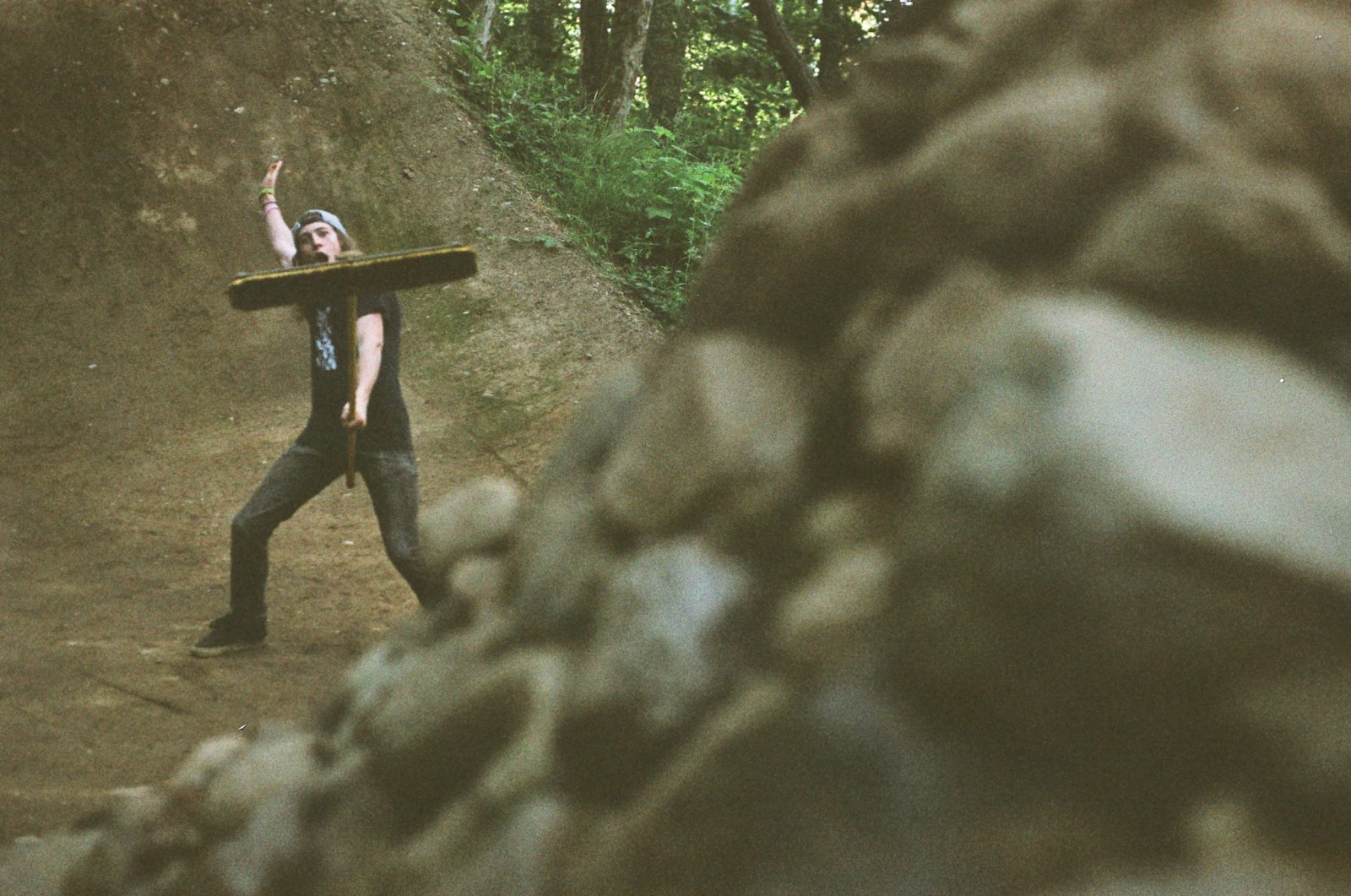 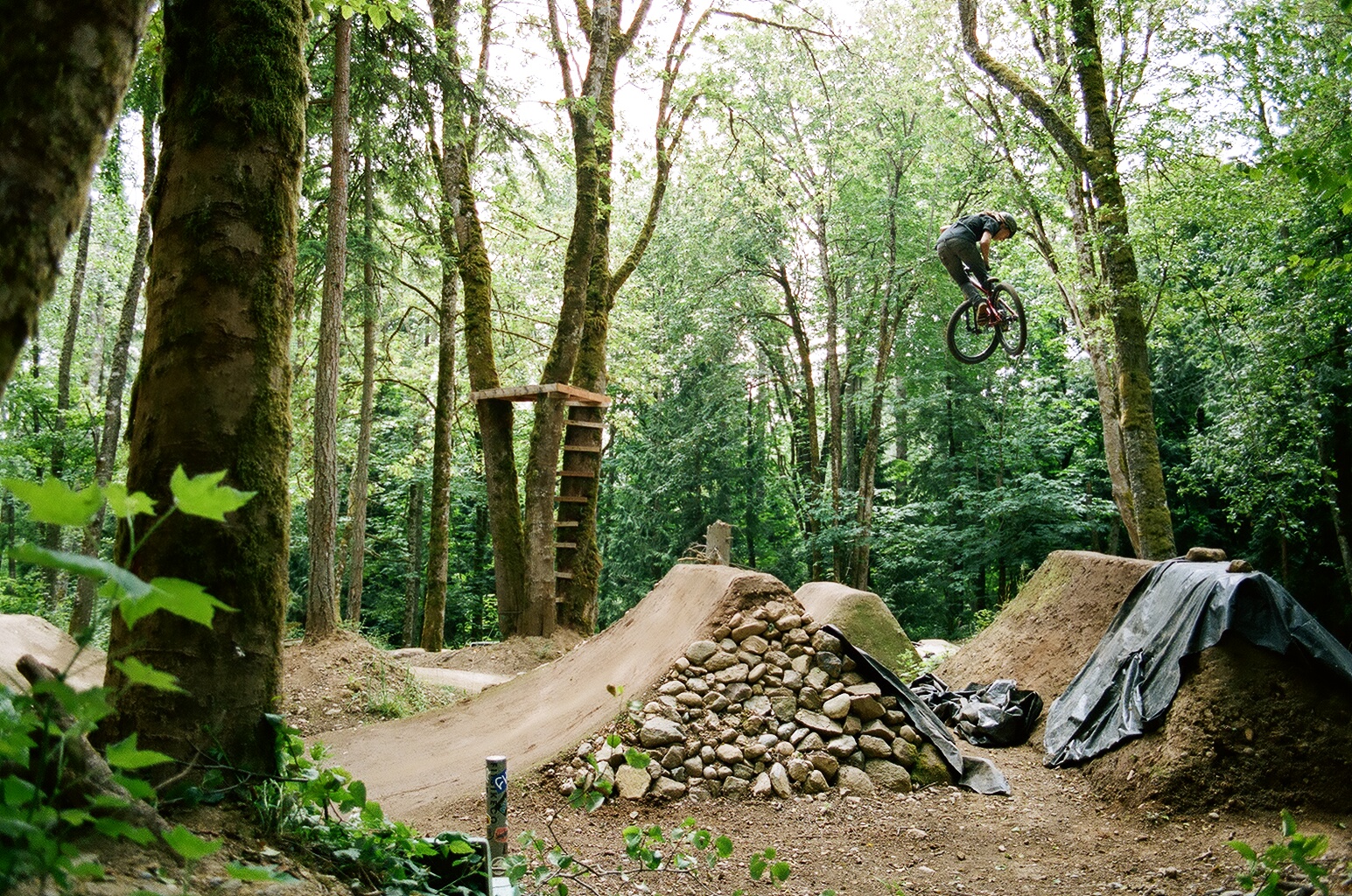 “My dad has always been super supportive with me with bikes and the jumps, he always tries to get involved with little projects and what not when he gets some time off from work. This year was kinda special for the jam because my dad’s friend hooked it up with a 250 water tank so we had water on lock for the most part, another friend had an old 5000 watt generator laying around that he didn’t want, so we snagged that from him. Since we got the generator my dad wanted to set up lights so we could ride at night. I got off work at 9 then I set up the lights ’till 1 in the morning.” – Ian Carpenter 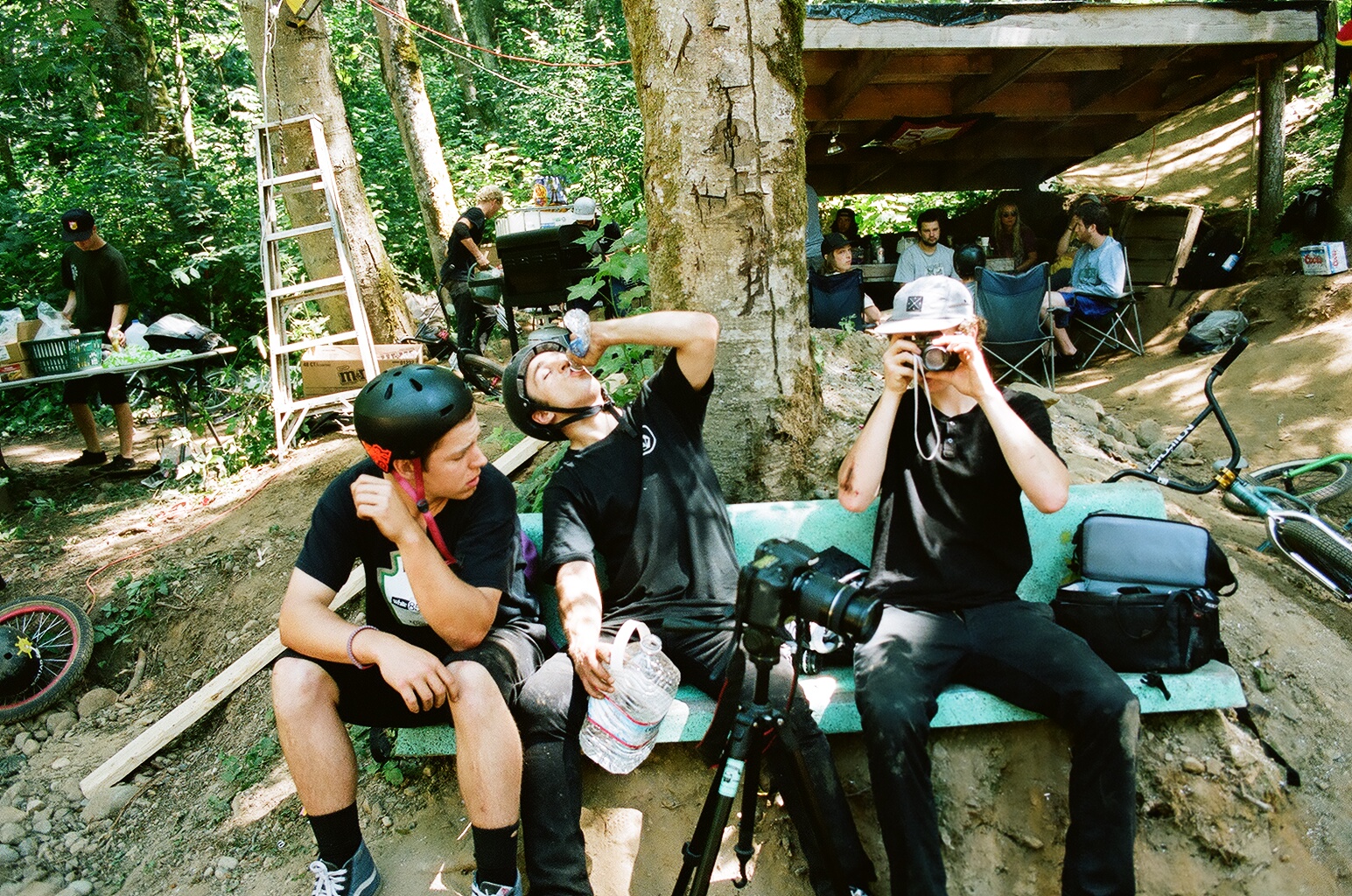 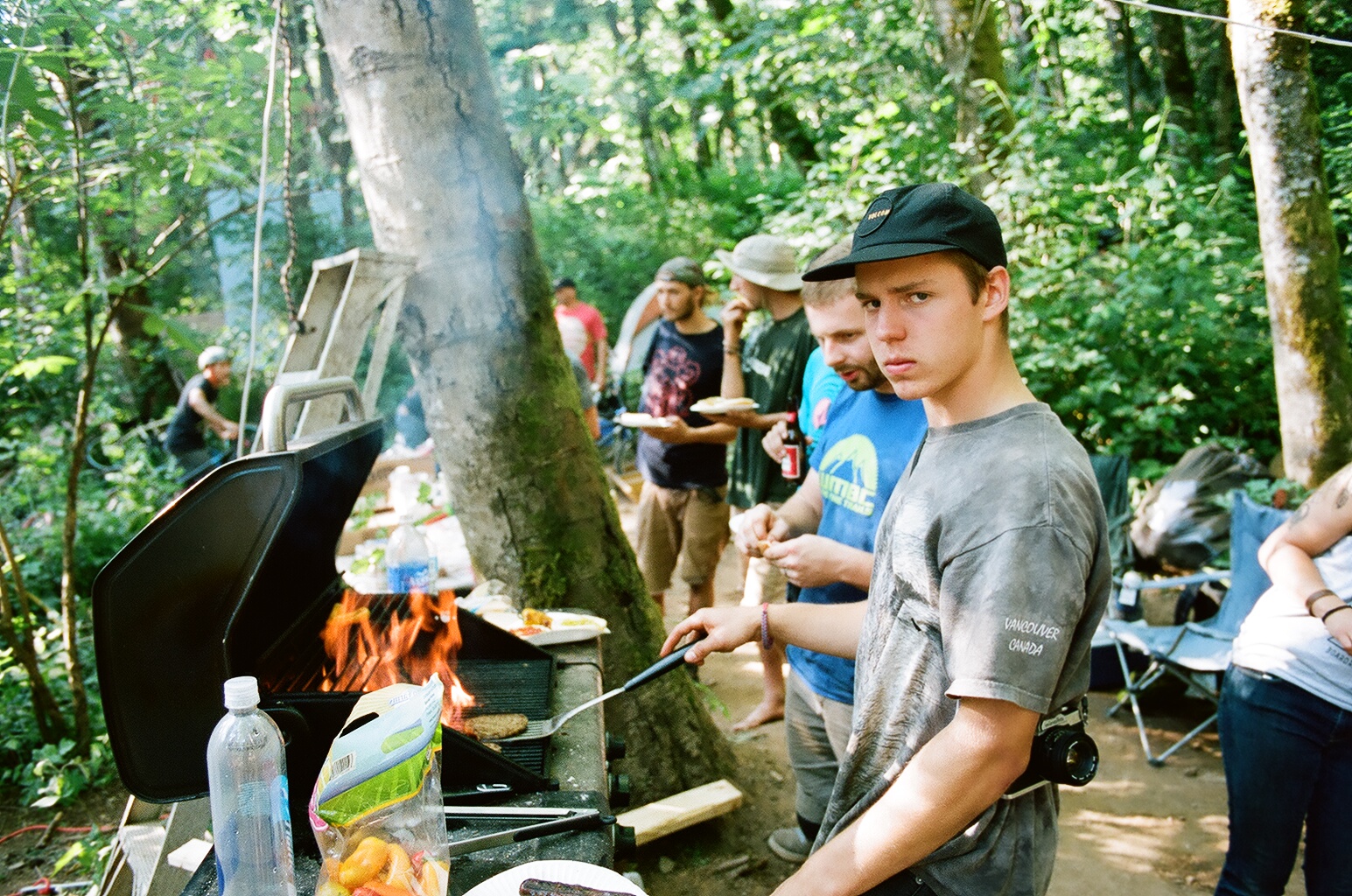 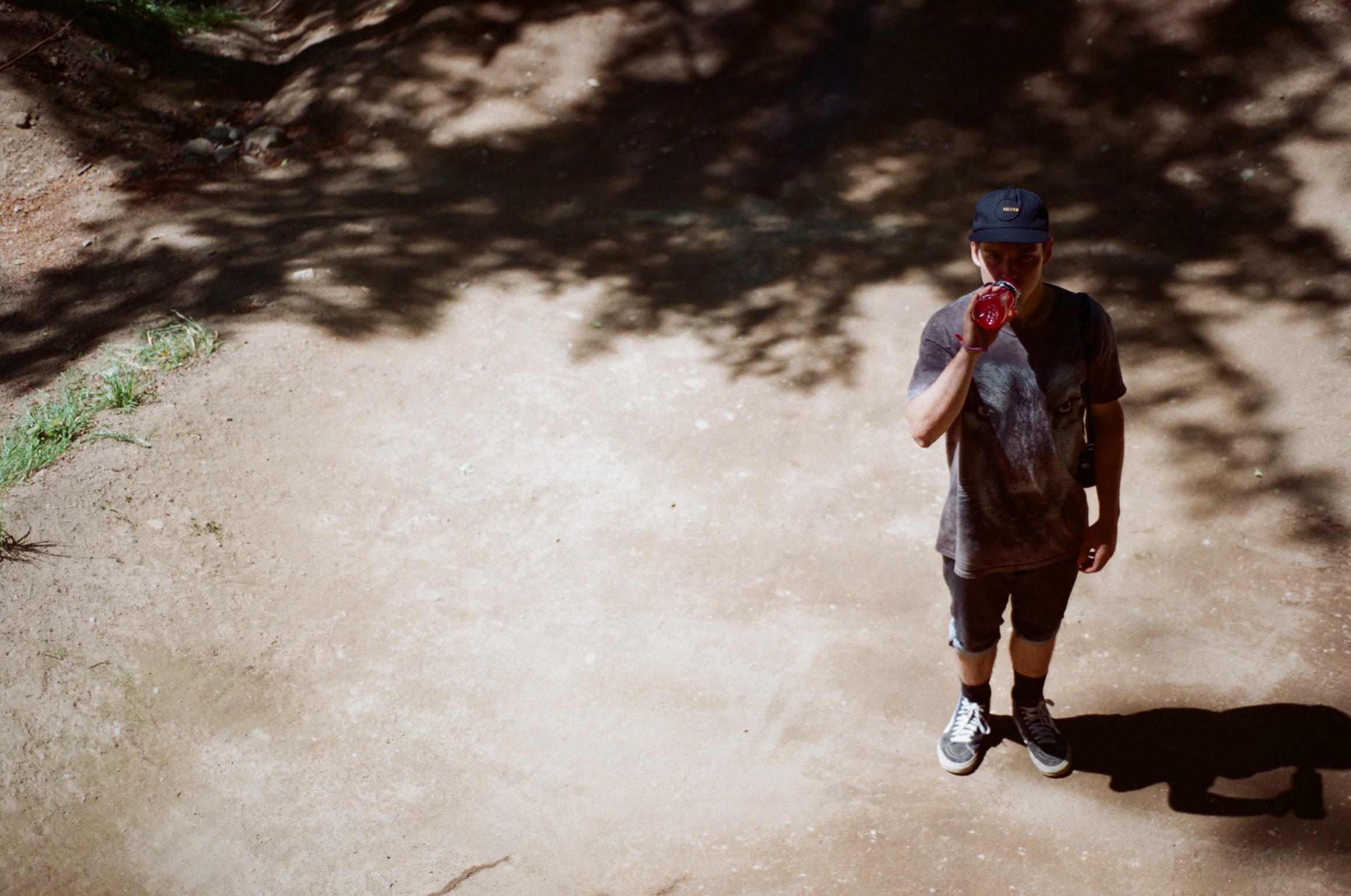 “All the loc’s are Andy Grant (gutomino), Spencer Baldwin, Scott Scamehorn, the occasionally appearance of Derek DeVries, and myself. I can’t even start on the people that came, I think I knew like a third of the people that came out, the rest were all people from outta town. One of my favorite parts about the jam was watching everyone throw down: Dylan Bibbins from the Jungle Trails down south learnt flips about 6 months ago or so and stomped one on the big jump (Megalodon); Nate Berkheimer is always a pleasure to watch, so much style and bike control all mixed in with tricks; Caleb Holonko was getting creative and spontaneous all day with half bars up and step up and bar to t-bog; Nick Tingren was stretching out indian air’s all the way into the night sesh, and then on Sunday, Justin Wyper made the commute from Whistler to ride. He basically got the gnarliest out of everybody, threw down on one of our newer lines called Reggae Shark. The second best part was riding at night.” – Ian Carpenter 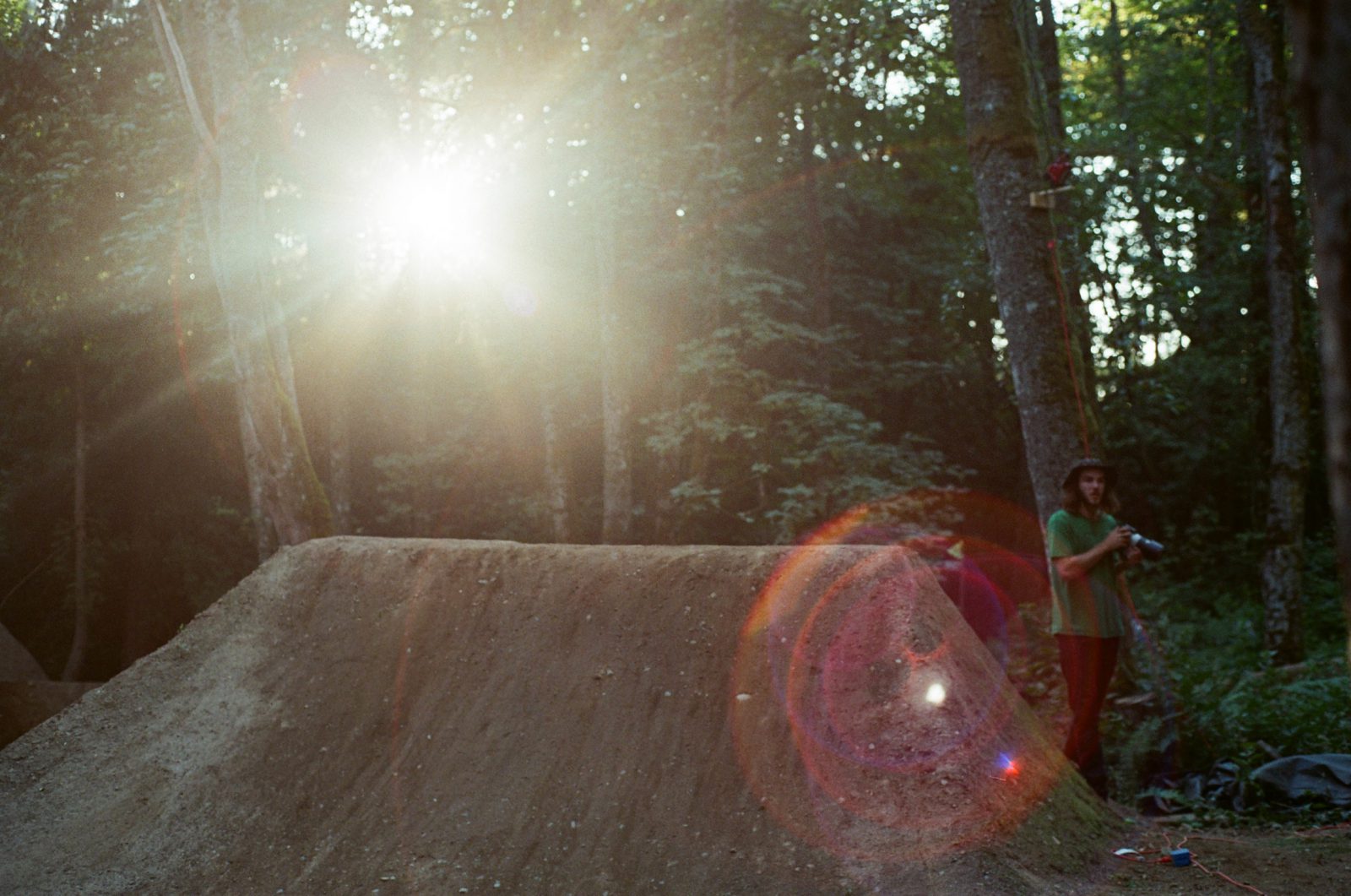 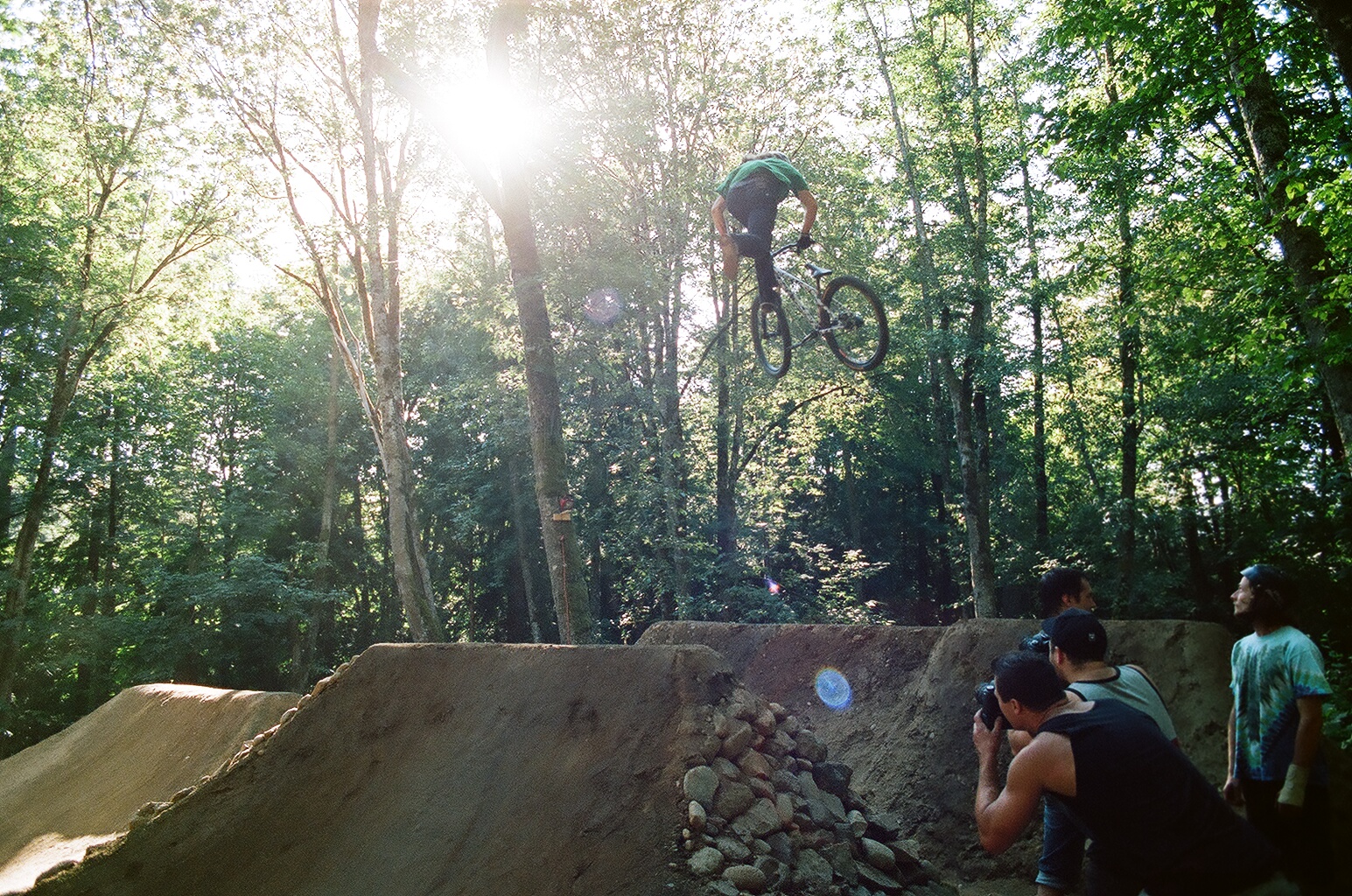 “The Shire is rad as fuck, plain and simple. Straying far from your typical mountain bike spots with a couple straight jumps and a ‘trick jump’ The Shire has that feel that only BMX inspired trails have. The winding set of trails complete with high speed berms, big hips and pull back jumps remind me of why I first got into riding trails and why its still my favorite thing to ride today. Within a couple runs I knew this place was going to make for a fun weekend of shredding with MTB and BMX homies alike. Can’t wait to come back. Shout out to the Shire crew for putting on a hell of a weekend.” – Nick Tingren

“It was my first time to the Shire trails. I drove down with Tyler Olson. It’s always sweet to go see and ride new trail spots just because everyone has different building styles, which is rad to experience something different from home. The lines were really fun to flow and I was blown away on how many riders showed up. Not everyday you get to session with more than 20 riders. The jam went super well and the jumps held up with a little work. Big thanks again to the locals for hiding it down.” – Daniel Fleury 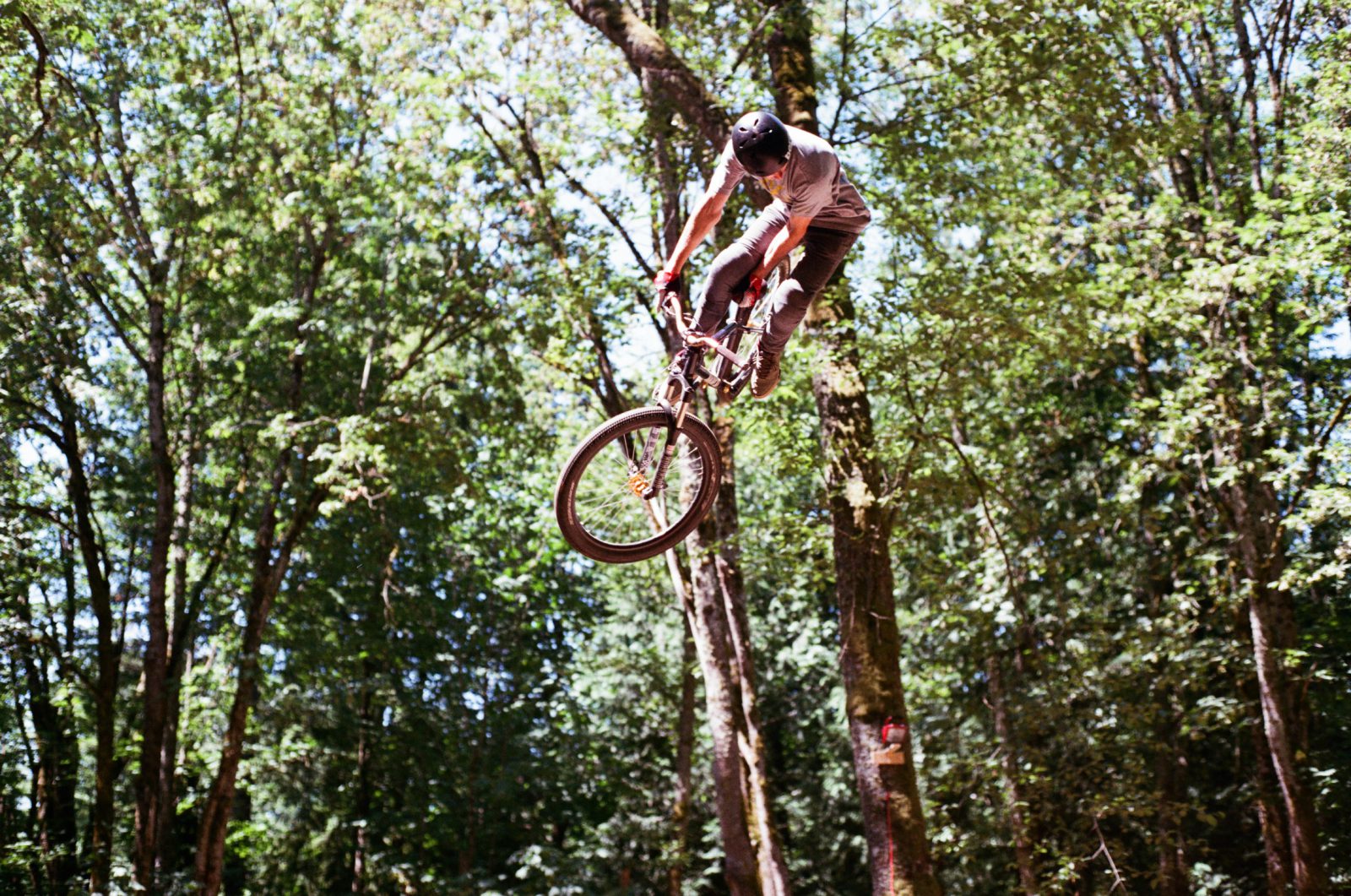 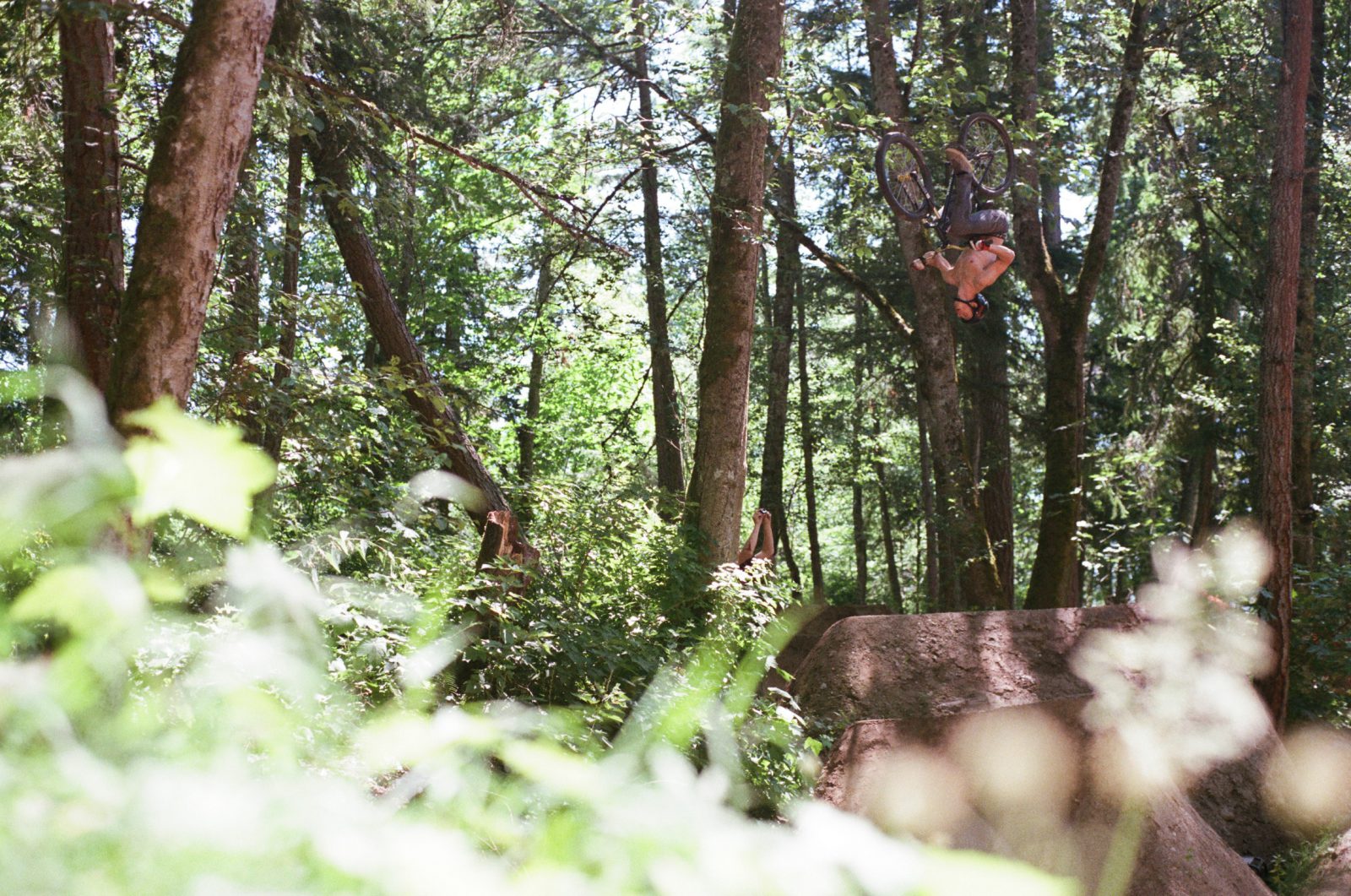 “Towards the end of the jam the jumps started to get pretty rough. Too many people got too sketchy and were foot planting lips, don’t get me wrong, everybody has to figure the jumps out, but damn some homies were just yard sailing their shit. Now that the jam is over I think that it will take around a week or so to get the place back to normal, which is good considering how many runs were laid down. We had enough lights and extension cords to light up the top 3… Until the generator blew up (laughs). After that, we had a bon fire, handed out awards, talked some shit, and partied.” – Ian Carpenter