After publishing the latest Analog post, I received the following e-mail from Australia:

“My name is Simon McLaine. I am a Nineteen year-old freelance photographer and Mountain biker from Australia.

I’ve recently stumbled upon your website… Especially after reading the interviews with Paul and Nick who shoot images using 35mm film. I love the idea of interviewing people who still use this medium.

I too shoot 35mm film, as well as super 8, so I am basically enquiring as to whether or not you would be interested in collaborating with me, to create another article on someone in the cycling community who still loves to shoot film.”

It is always a pleasure to receive e-mails from people saying that kind of stuff. I appreciate it a lot. It is awesome, really.

Here is the third installment of Analog with Simon Mclaine. 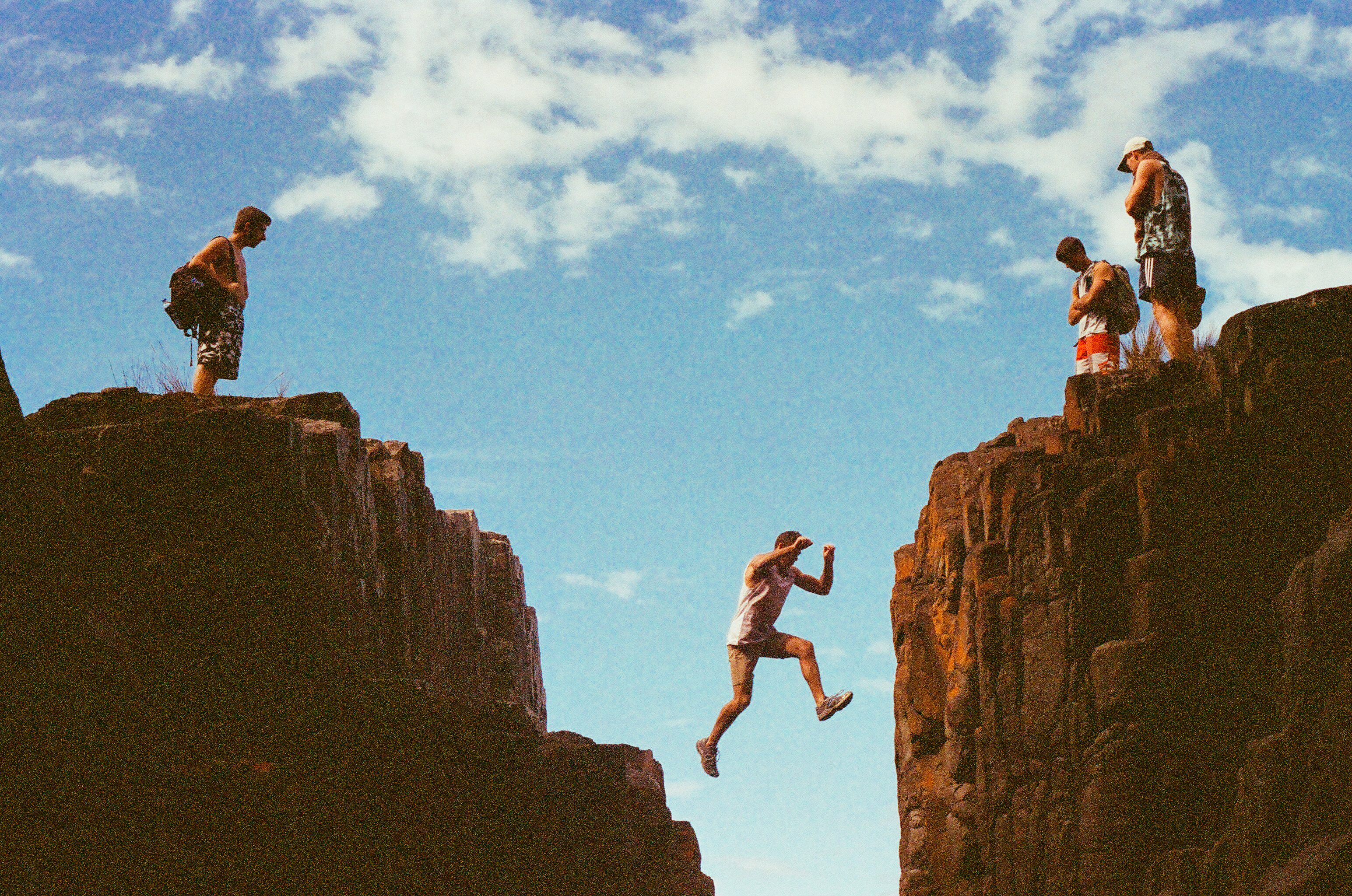 “This is one of those photos that was taken purely out of luck. We had walked around the rocks for about 15 minutes to get to our favorite rocks jumps. On the way, there are several inlets you have to either walk up and around or just jump over. Marco and Harry on the right had jumped over this particular inlet whilst I scoped out an angle from the interior. I barely had enough time to frame the shot when Dan made the jump. I hadn’t worked out a correct exposure either, the last frame I saw before the shutter released burned into my mind. I knew it would be a sick photo if I did achieve a good exposure, and was fired up to find I had after picking it up from the lab in town a few days later.”

Hi there, Simon McLaine here. I’m a nineteen year old freelance photojournalist and mountain bike enthusiast from Tasmania, Australia. I have been shooting 35mm film for roughly 2 years using my Canon T70, but in the past 6 months I have fallen in love with shooting Super 8 video. My favorite B+W film is Ilford HP5+, and my favorite color film would have to be Fuji Provia.

I choose to shoot film due to the process that comes with it. I find it more playful than using digital; you compose and think about your photo the same, but once you’ve hit the shutter release that’s it. Once you’ve developed it and found you’ve actually made some pretty cool images, there’s no better feeling.

I have a mate that used to cruise around with an old 35mm rangefinder. After seeing this I always thought of shooting film as a fairly advanced way to make images (laughs)… But one day I found my dads old T70 and decided to find out what all of the hype was about.

My uncle that used to shoot a fair bit back in the day is always stoked to share a thing or two, but apart from that this whole 35mm game has been completely self-taught. Whenever I’m unsure of something I’ll usually consult the internet. 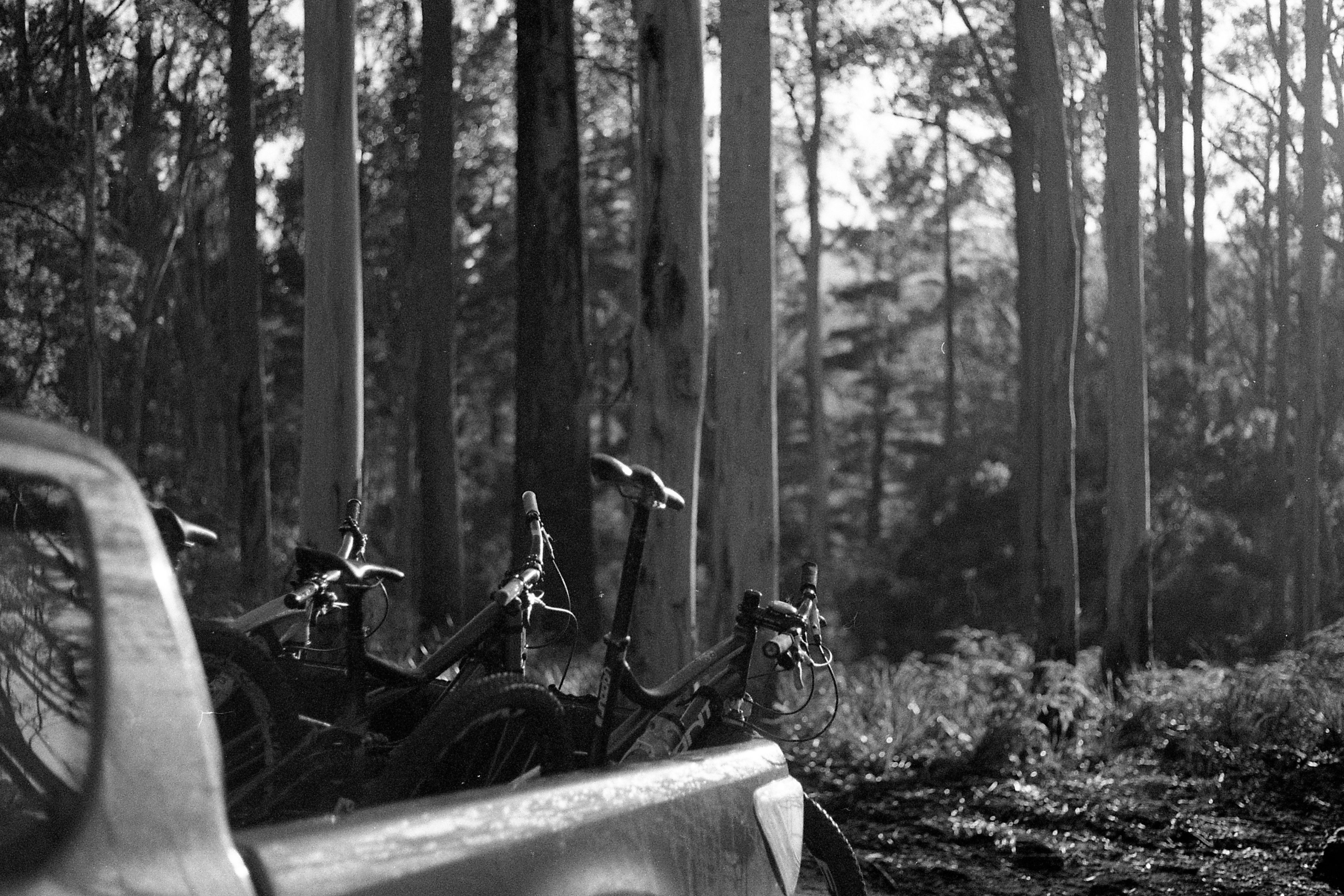 “Last year I was working for a trail building company and on the last morning before we opened the park, I snapped this shot of our work car with our ‘tools’.” 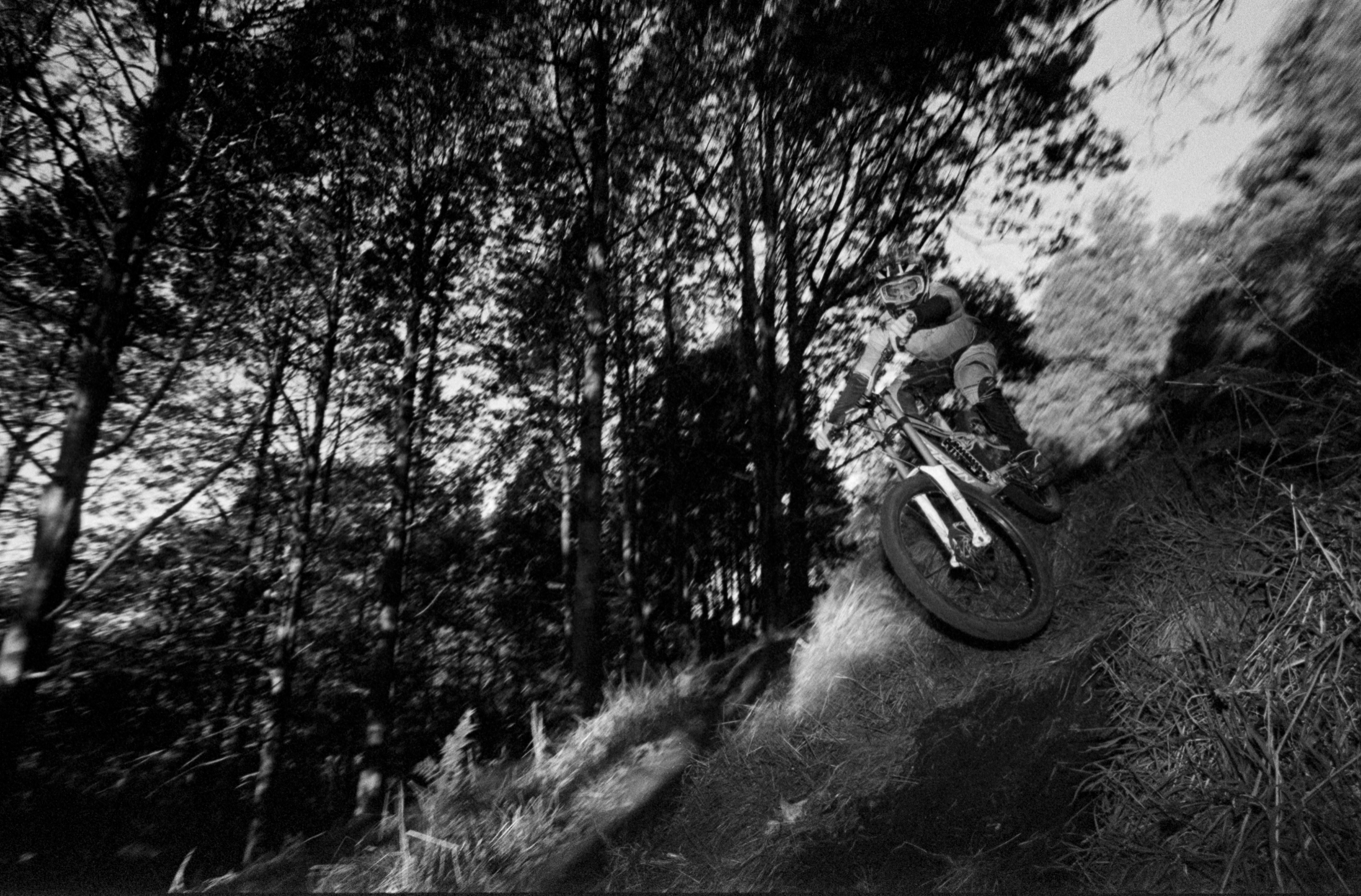 One of the big problems I found at the beginning was figuring out where I was going to get my B+W developed. I shot a few rolls of color here and there but I had acquired 5 boxes of HP5+ from school when I attended college. The only shop in town that developed it was charging more than what I wanted to pay, so I found an elderly man on a local Flickr group that lived up in the hills to do it for me (laughs) He was stoked on the whole thing, and gave me a few pointers to start developing it myself.

Shooting film is cool because you just get so much depth to the images. They convey their own emotion that you can’t get using digital. It makes you think more about what you’re doing which in turn creates better imagery. The only disadvantage is that it’s quite expensive.

It’s a combination of the two. Of course I enjoy doing it as a pastime, if I didn’t I wouldn’t be doing it… but I always find it great if I can get people hyped to either get outside or to even pick up a camera themselves. 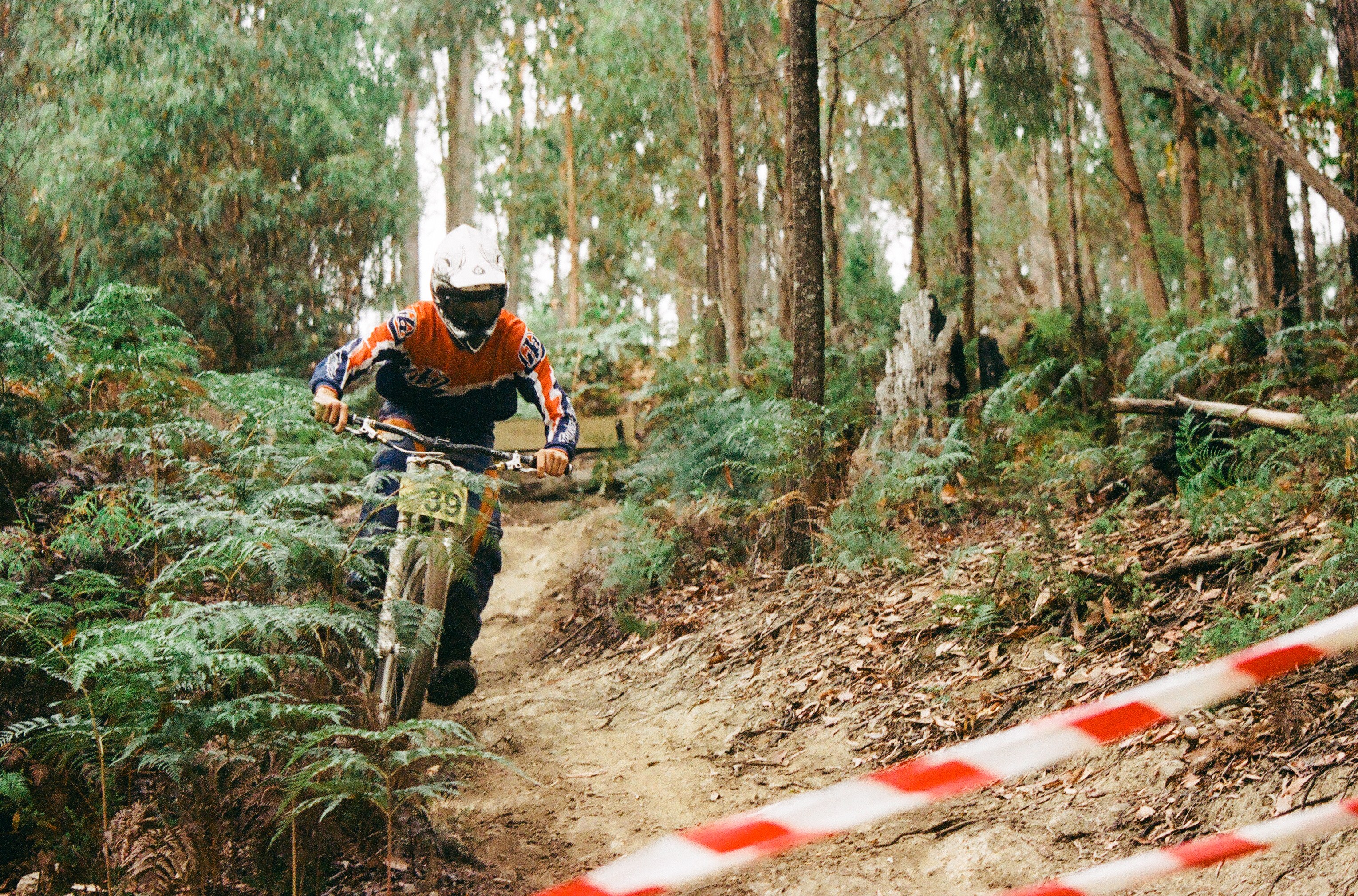 I’d say it’s about 50/50. I find the images that have been planned or thought about in more depth tend to be more engaging, but I also find the images that I snap without thinking are usually more abstract and have a personality of their own. They might not be as tight in a technical sense, but they’re still cool.

At the beginning I used to play around a little in post, mainly with color stuff… But then I remembered that’s not the reason why I’m shooting film. If I’m going to do that I may as well just shoot digital. If I haven’t taken as much care for dust when scanning my negatives, I’ll usually use the spot removal tool in Lightroom to remove dust and blemishes in the images.

I’d say don’t be frightened like I was. Just pick up an old 35mm camera, watch a few videos about achieving correct exposure, and start shooting. Learning composition and other stuff will come through practice… Photography is an ever evolving thing which you are constantly learning about. Once you get an image you’re super fired up on, you’ll understand why so many people love shooting film. 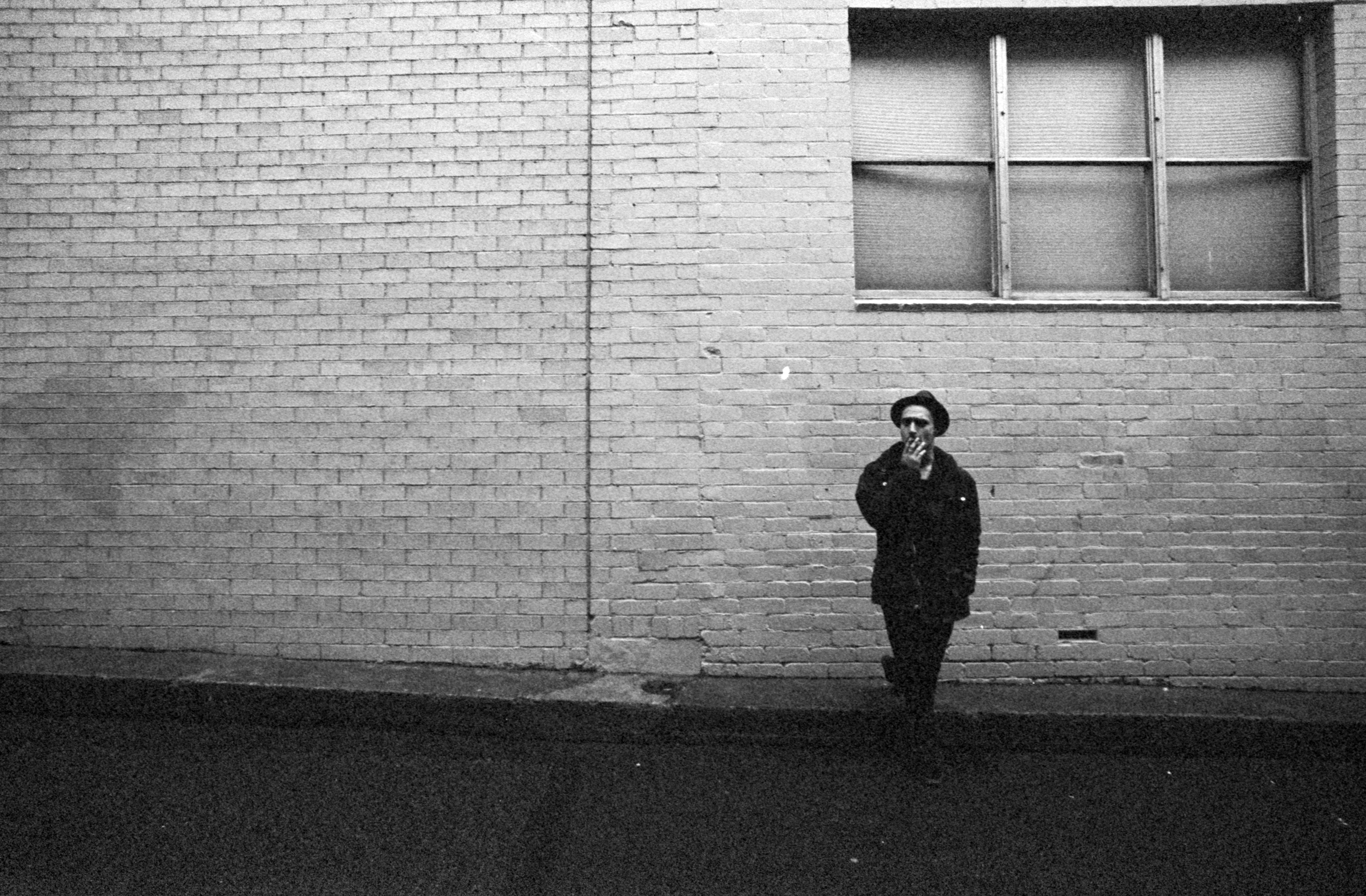 “Meet Chris. Chris and I met up for lunch on a cold, miserable winter’s day. We then shot portraits in an alley way.”

Thanks to everyone that has given me warm feedback on my work, and to Bicycle Nightmares for taking a look into this particular medium of photography. Peace.