Nick Tingren shares a couple of stories behind his favorite film photos and responds to some questions for the second installment of Analog. 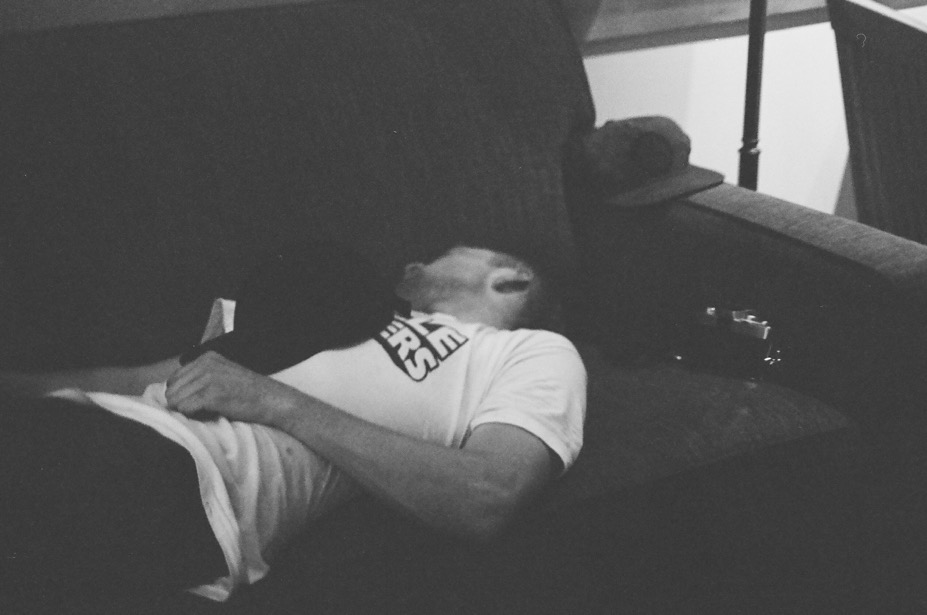 “Wink showing what most of us experience during Crankworx. I don’t really remember the night before but it probably involved wandering around the village then ending up at Long Horn and talking some shit.”

Why do you shoot film?

I like shooting film because of the integrity that comes with it. There are no re-dos and do-overs and that feeling you get when you do capture something remarkable is incredible.

About 3 years ago I was up in Whistler for Crankworx with Wink and, we were actually about to take off and head back to the ferry to drop him off and he had his camera sitting in his lap. I asked him if I could try it out, snapped a shot of him just chilling and I was instantly hooked.” 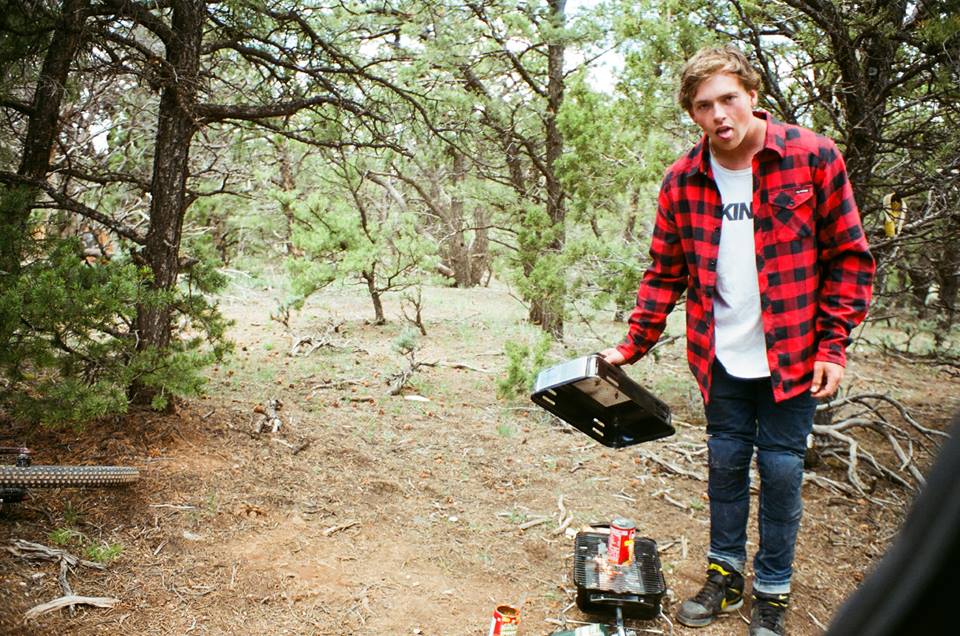 “This photo was taken on my first MTB contest trip to Grand Junction Colorado. We were at the Ranchstyle campground where Noah was attempting to cook beans on a barbecue. We had just rode down some sketch trail at the ranch where I ended up blowing up on a shit berm jump and high-fived a cactus.” 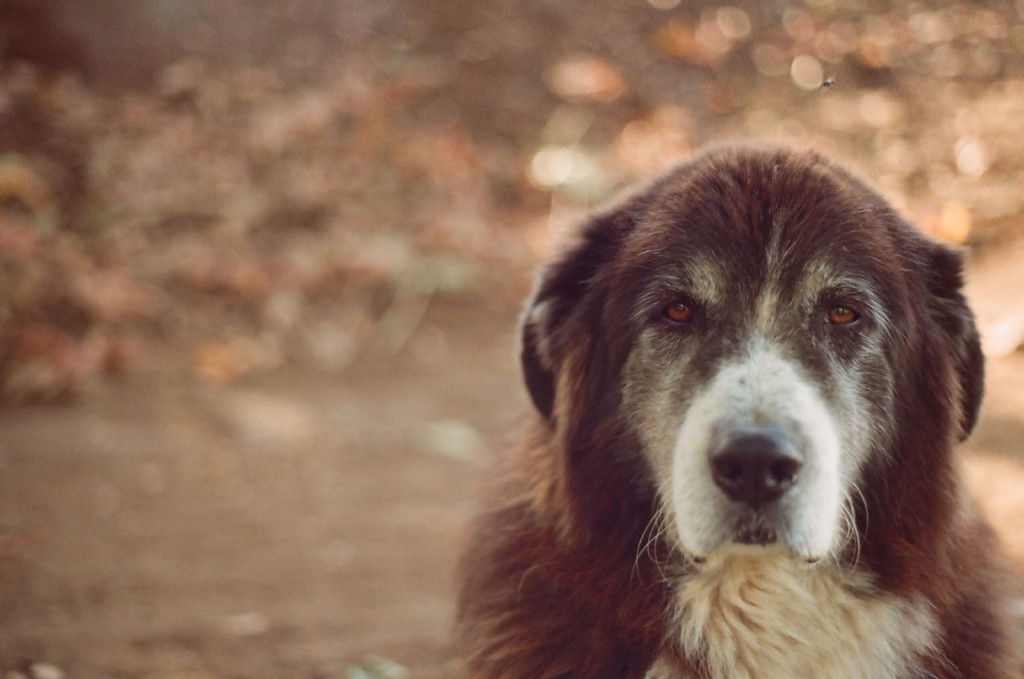 “If you ever get the privilege of going to Dustin Gilding’s house you will no doubt get to meet this softy named “Snoop.” I shot this towards the end of the day when Lorny was getting clips with Dustin for Alchemy2. When I was trying to get this shot it was hard to get Snoop to stand still so I could get this shallow depth of field. It took about 10 mins of me being unsure if he was fully in focus and for Snoop to stop moving that I finally pulled the trigger.”

After that experience with Wink I got my buddy Brock who owed me money (laughs) to go out and get me a dialed film camera worth about the same amount as he owed me. After that it’s been completely self-taught, I mean I definitely ask people how certain things work and shit like that, but otherwise no formal schooling.

Oh f*ck where to begin (laughs) well first roll I ever shot I blew it loading the film into the camera and shot an entire roll of film that wasn’t loaded properly. Finding angles and composition was a bit of a learning curve as well as trying to shoot narrow depths of fields. 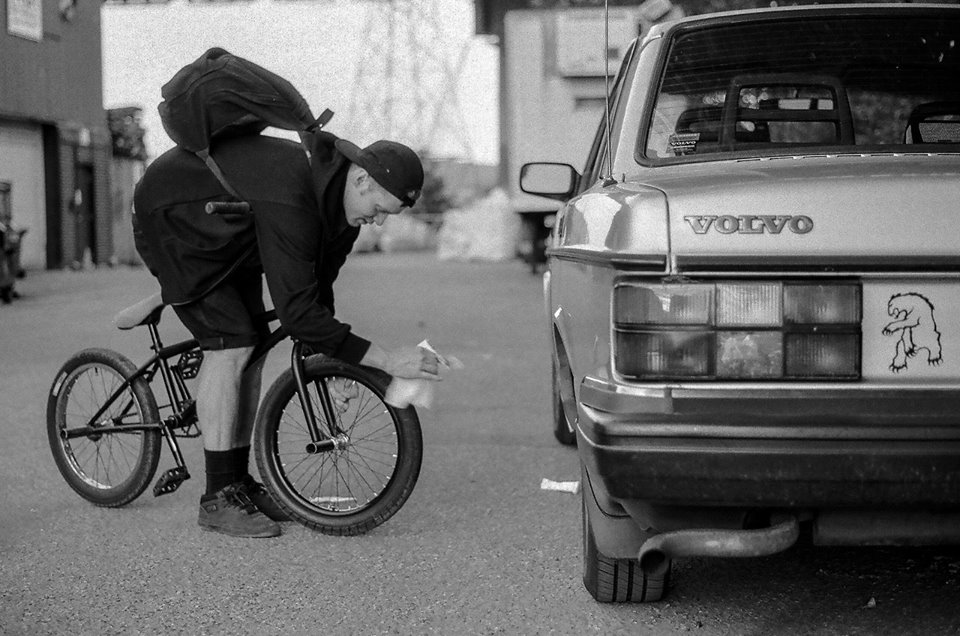 “Me and Wink had gotten bored one day and decided to head down to Bridge to do some digging/riding. Unfortunately, Wink’s hardtail had a flat, so he went with his 20” instead. Once the afternoon of riding and digging was done, we headed back out to the Volvo to pack up and head home. Wink then whips out these sanitary wipes and starts wiping his tires down beside the car. I had my camera in hand, and while Wink was pre-occupied, I lined this shot up and asked what he was doing, he responded “Gotta’ keep the Volvo clean dawg” 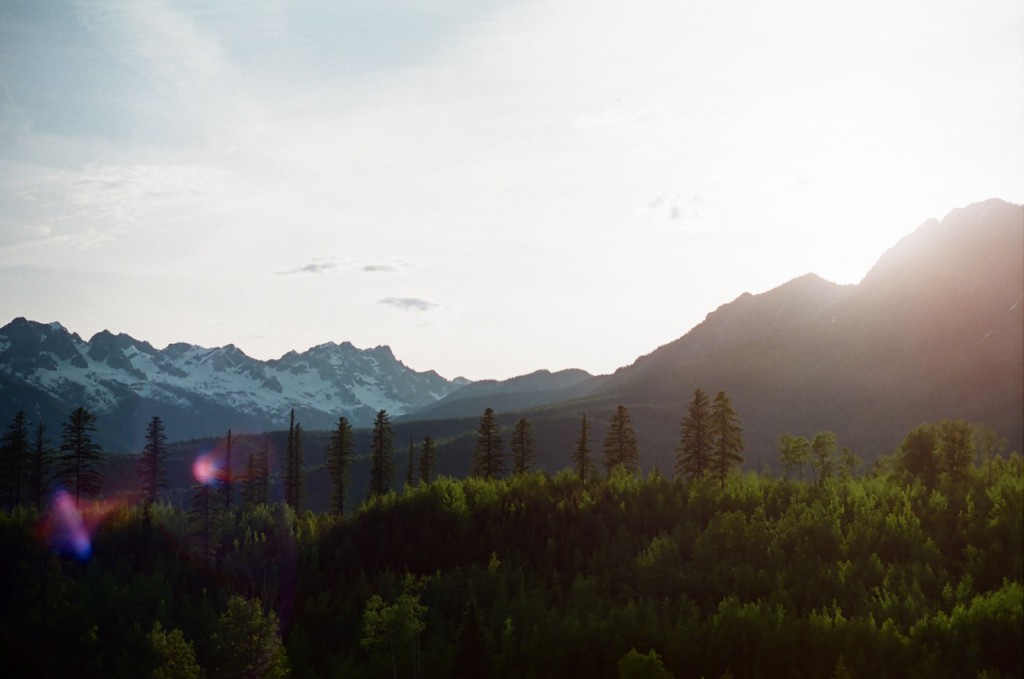 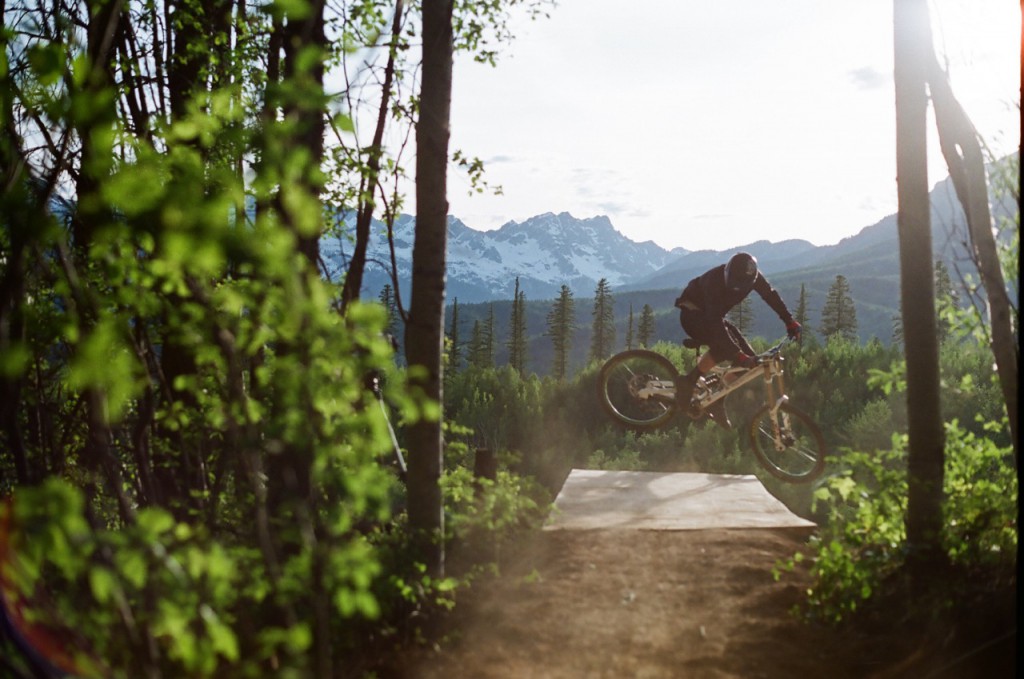 1. “This was shot with me standing on a drop we had spent all day building in Fernie for Noah to three for his video with Siggers.”
2. “After spending all day building this drop Noah finally sent it… and hit his dick on his seat.”

I find shooting film is better for shooting portraits and landscapes where as digital is far superior for shooting action and movement. Shooting true black and white film is something you just can’t get with digital. Even with filters and color grading, it’s hard to get that look that film delivers so nicely.

(laughs) I’ve definitely been called out for this, but I try not to. I’ll do minor adjustments to exposure and contrasts to try and make the image a bit clearer without compromising the film feel. 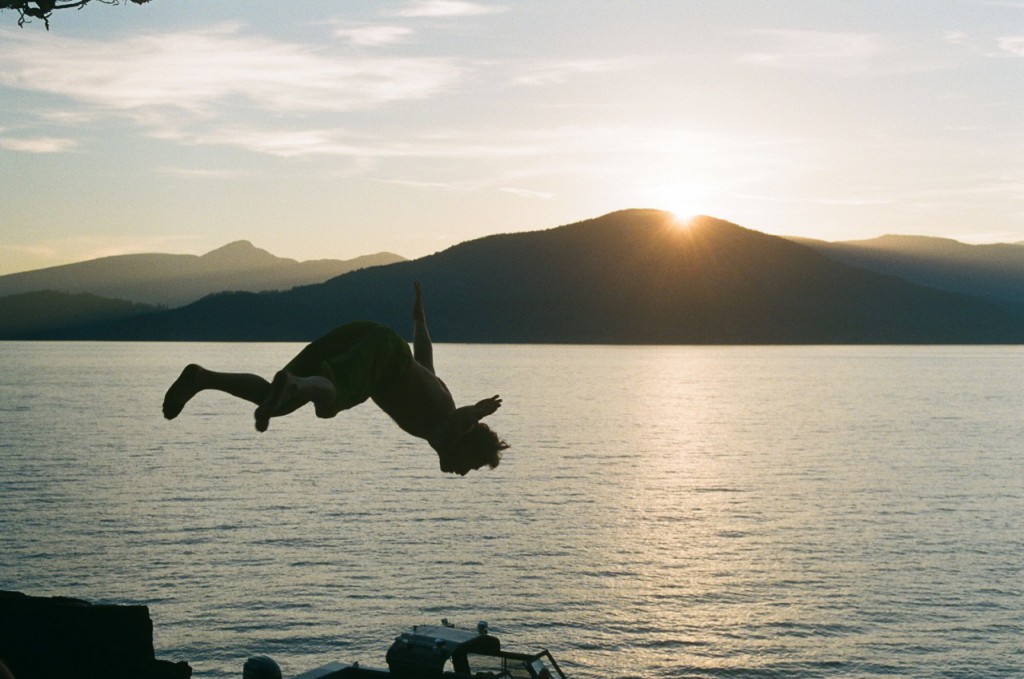 “Gully being the rad dude that he is let me tag along with his date to go cliff jumping in Lions Bay. Spent the day swimming and lounging and at one point Gully’s date tried to pick up a girl for me. Right as we were getting up to leave there was still a little light left and I told Gully to jump one more time and I’ll get a shot. It was a sick day of cliff jumping and third wheeling.”

Don’t get discouraged, I still struggle a lot of the time. Usually on a 24 exposure roll I shoot maybe 5 or 6 that I am psyched on, while the others are under/overexposed, out of focus, or the composition is shitty. It’s about learning how to properly compose, expose and capture moments that you experience. At first it’s a battle to get focus and expose shots properly, but once you get a shot you are psyched on you’ll be hooked instantly. It’s a sweet hobby and I urge anyone who thinks they have the eye for good shots to give it a try. It’s harder than it looks (laughs). 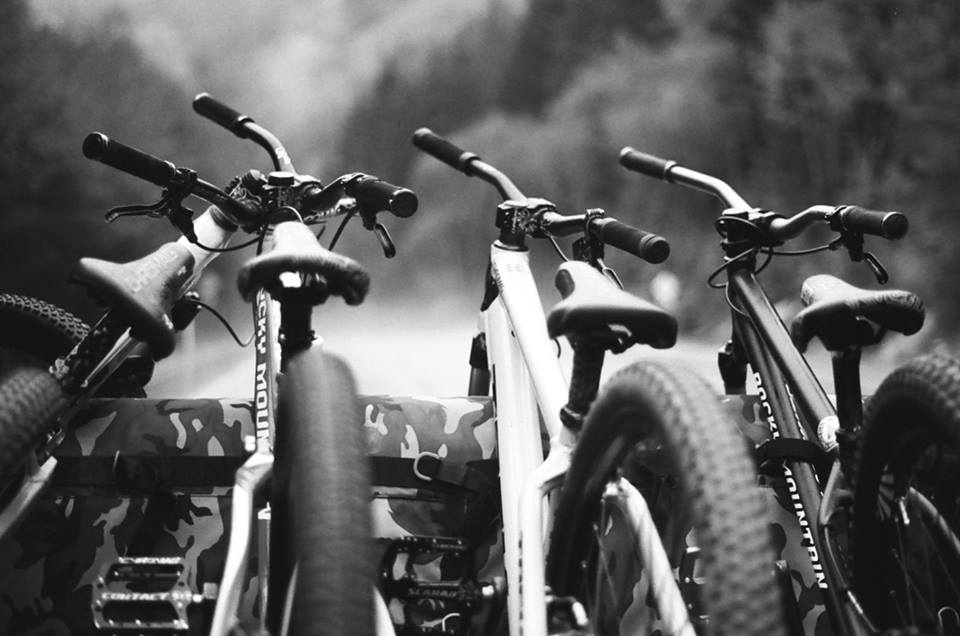 “I took this one day when Gully decided to do a random day trip to Whistler. I distinctly remember lining this shot up as we were going 120km/h down the Sea to Sky with the truck shaking and shit. After I clicked the shutter I for sure thought that it wouldn’t turn out due to shooting this at f2.0, but it turned out to be one of my favorite shots I’ve taken so far.”