An open conversation with Ace Hayden, known as The Wolf, about music, tattoos, bikes, freeride, injuries, surgeries and future plans. 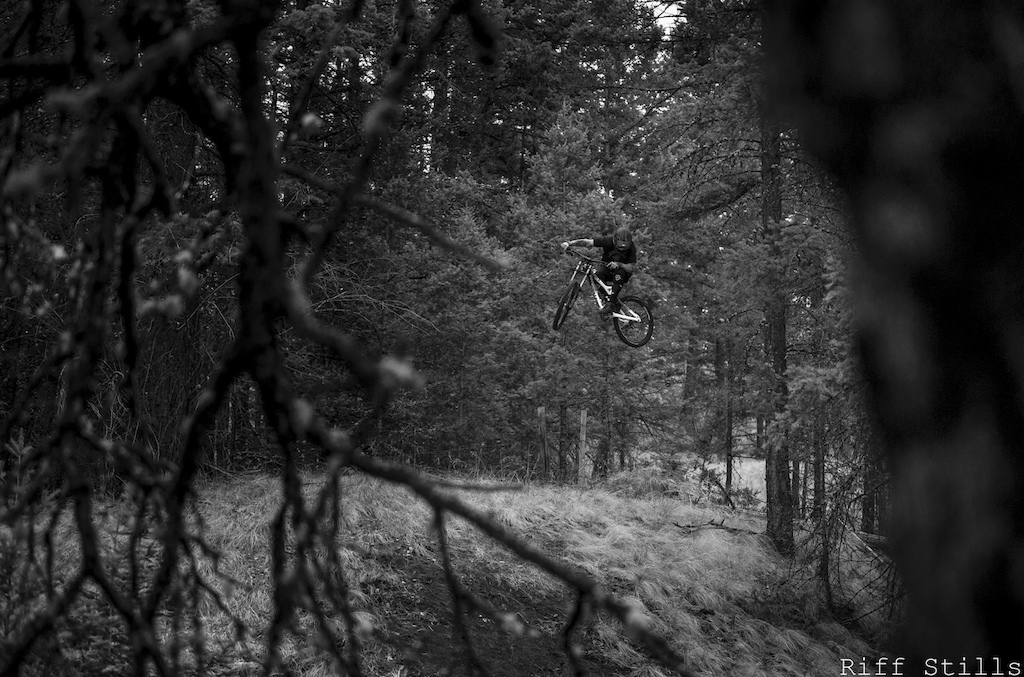 Yo! Just listenin’ to some tunes and painting man. How are you doing?

I am good. What are you listening to?

I thought that you were a metalhead…

What are your favorite bands?

Fav bands… I’d have to say, 3 Inches Of Blood, Metallica, Trivium and I’m always down with some of The Black Keys.

Good album. Have you been to any festivals or shows?

Yeah, I’ve been to Sasquatch and Pemberton music fest. I’m actually just about to buy a couple passes for Pemberton this summer right now (laughs). That’s more Rap/Indie style though, not much heavy stuff going on there… But I’d like to hit up a Metal fest soon for sure! 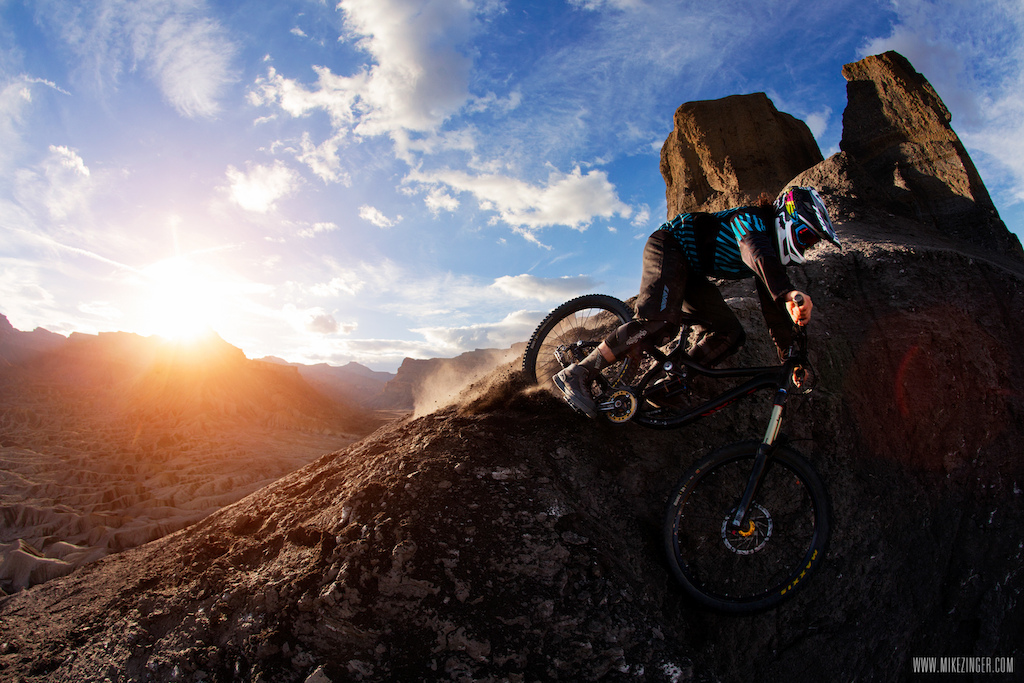 Yeah me too man, it has been a while without going to a metal show… Anyways, you have lots of tattoos, do you really like getting tattooed? I mean, it is painful, I do have tattoos but I hate getting them.

(Laughs) Man, I love getting tattooed. Depends on the spot of course. I’ve had a few like 8-9 hour sessions and that’s a little too much for my liking. I like the shorter ones though, It’s a pretty cool way to learn to deal with pain. That’s mainly why I like it. And something about the smell (laughs). I have to get my hand hammered in again and I am not stoked on that.

Do you plan on getting fully covered? Neck, hands, chest, stomach, ribs, etc.

Yeah! Full body one day. I’m planning on doing my full torso sometime this year and I’m so psyched. Full face too, fuck it.

What is your favorite tattoo style, tribal maybe? And artist?

Yeah tribal is the shit man! (laughs). My homie Jason Brownless has been doing my left arm for a while now. He lives on the other end of Canada though, where I grew up, so I only ever get work done by him when I’m able to travel there to visit everyone. In Vancouver, I’ve been going to a dude named Stephen Shaw and he is a rad dude too. I’m pretty into Neo-traditional and American traditional styles. I also think some of the artists getting into geometric style of stuff is really cool too.

Have you seen a change in the way people treat you because of your tattoos?

Ohhhh yeah dude, It’s insane! An example: I got into the elevator in my parents’ apartment building and a lady was in there with her kid, and when I walked in and she saw me, she grabbed her daughter and hide her behind her, and just stared me down ’till I got out (laughs).

Some kids are hyped. When I was on a plane last year, a kid beside me started to draw all my tattoos on his arms in marker. His parents were pissed (laughs). One day, It’ll be all good though, I feel like in a long time people will think that It’s cool if you don’t have tattoos. So many kids just get fully blasted by shitty artists when they are 18 and look haggard all their lives. 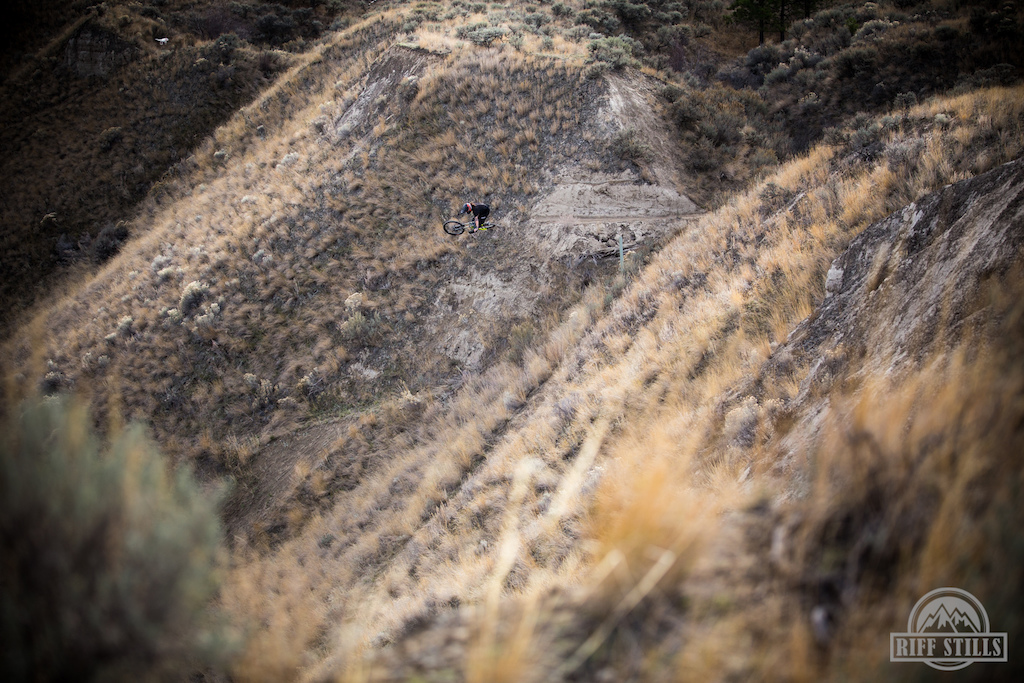 How did you get into bikes?

I grew up near Toronto, and played elite football my whole life up until I was 15. I had a dirt bike and a basic BMX that I rode off my skate ramps. That was the extent of riding bikes until my whole family moved to Kamloops in the summer of 2007. Before we moved, I did a lot of research about the town, and saw how sick the MTB scene was. When I got there, I got pimpin’ DH bike from Mike Kinrade and fell in love with the hills and all the homies riding in them.

I really enjoyed your latest video “The Animal”. Why that name? How much time did it take to finish the whole project?

Thanks man. “The Animal” thing came from a few areas I guess. Brooks approached me with an idea from a Wes Anderson video about perfect symmetry and then applied it to all the wildlife in the area, and then to me. I think the whole knee thing and how I handled it and coming back from it so fast as well, just kind of sold us on the title even though I shouldn’t have been riding on it when we finished. There is a lot of wildlife at Sun Peaks and we wanted to show how sick it is up there as well. So the symmetry would be me and the animals kinda thing. And the fact that I’m known as “The Wolf”. (laughs).
We filmed a day and a half at Sun Peaks and then I ate shit. Then just a couple days where I could manage to ride in the wind and all the late season weather. Was effin cold man.

So what did you do on your knee? I know that you crashed or something and got it stitched out, but why the need of surgery?

When I crashed filming, my knee pad slid down my shin while I was in the air and my knee was the first thing to hit the ground. Probably pushing 70km/h at the time. I almost severed my patellar tendon and just mangled everything inside. I had a major infection and was on IV treatments twice a day for a while. It was the worst pain of my life when the infection hit. It was no joke. But the surgery was to remove my bursa sac, cut out all the scar tissue and damaged tissue, and then clean out all the debris that was still in there. The surgeon said that it was filthy and still packed with dirt and rocks…

Crazy. So it was to clean everything up, nothing was broken right? You still have your ligaments, meniscus, etc.

Yeah, no breaks or damage to those major tendons so I’m hyped. The main problem was my bursa sac. It got ripped to pieces and was making my knee swell up and soo sensitive. It was like a huge boob hanging off my knee for the last 5-6 months (laughs).

It is going to be a quick recovery right? Or do you need to gain movement and muscle again?

Super quick recovery and I’ve actually been able to still go to the gym every day and physio so no problems with muscle or movement.

Do you train or workout to keep you in shape?

Uhm, yeah quite a bit actually. I’ve been going pretty hard in the gym every day up until I had surgery. I wanted to get myself into as good of shape as I could going into surgery, so it’s not as hard of a climb getting back up to 100%. I’m also thinking of becoming a personal trainer down the road.

Was this your first knee surgery? Have you had any more injuries?

In 2010 I had an elbow reconstructive surgery and they cut my knee open and took pieces out of my hamstring and other spots to rebuild by elbow with. That’s the closest thing I’ve had to “knee surgery”. 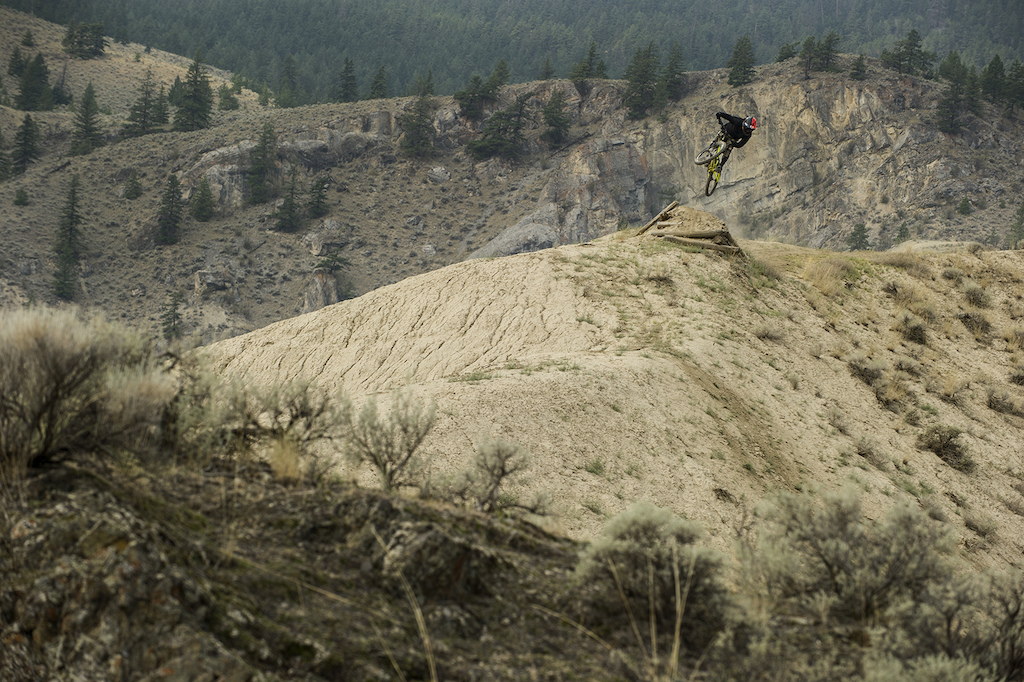 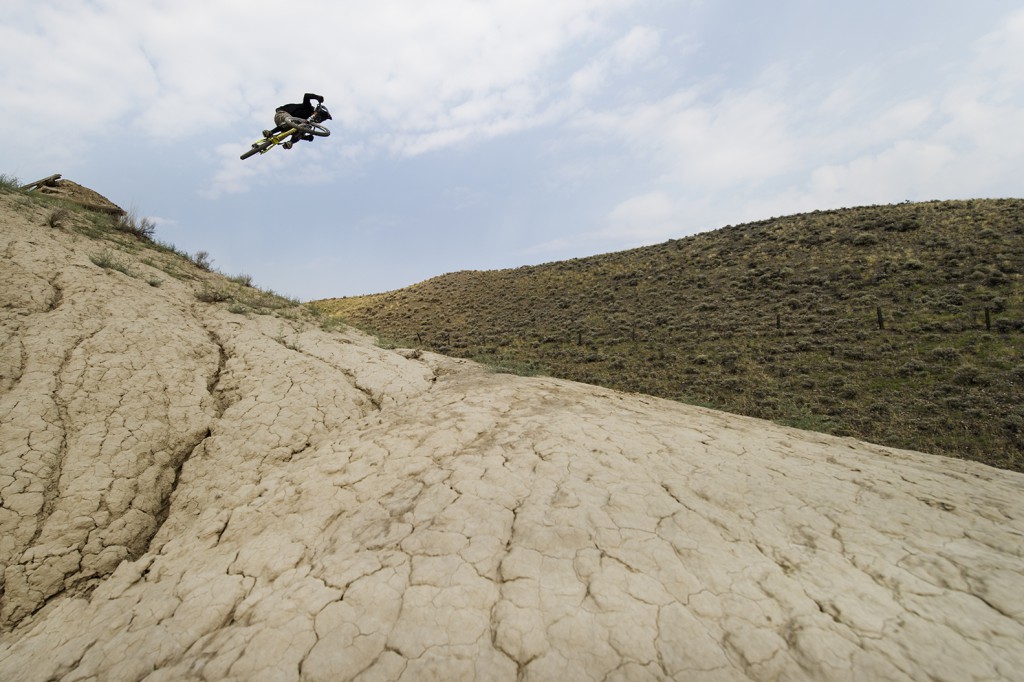 What does inspire you to ride?

The main thing that inspires me is just being able to hang out and have fun with all my homies. It’s really crazy how much my life has changed since I started riding and the direction and view on life that It has given me. It’s just fun man, I know a lot of people say that, but that’s why I’m down with it.
As for things within the sport. People that do it how they want to and stick true to what they believe, instead of what some roadie TM on the other side of the world that has no idea about what is what. I really look up to dudes like Andreu, Aggy and Rheeder for inspiration as well.

What has been the biggest thing you have hit? Or the most difficult/scary line you have ridden?

Being a freerider is fun man. It’s not that I’m hitting huge stuff everyday, It’s just that what I ride normally is big kind of thing. So hitting huge stuff doesn’t seem too gnarly. Learning to ride in Kamloops made that easy.
I’d have to say for a double maybe like 60ish, nothing too crazy. I went to flat onto my ass on the big jump at Aggy’s FEST, so that was like 70ft. Stepdown maybe like 45ft and drops like 35ish? I’m not a huge straight drop hunter when I’m out scoping, they are fun in all, but hurt the body sometimes (laughs).

You will be attending Laconfest in Spain next June, how stoked are you?

Yes man, so stoked. It will be my first time in Spain. I’ve heard so many stories and missed out on going there in the past. I can’t wait to hit up Nasty’s (laughs). But on a serious note, I can’t wait to see what they come up with. Those guys are mental so I’m hyped.

Who does support you?

Supporting me this year is Marzocchi, RaceFace, Giro, Smith Optics, Spank and Dunbar Cycles. Huge shout-out to Scott Bikes as well, for helping me out last minute for this year. Shit went south for me and they stepped in and made it happen.

What are your plans for this season, will you be following all the FEST series stops, film more videos…?

For this season’s plans I’ll be hitting up as many FEST’s as I can. Spain, Norway and Belgium. Jumpship, Crankworx… Rampage is the life goal. Then try to film and shoot as much as I can man. I’ m paying my own way, so It all depends on managing my time and money as good as possible.

Just want to give Héctor a shout-out for taking the time to do this. My lady JJ, friends and family. The companies who support me, Canada’s healthcare, Ron and Krys, and everyone who picthes in to make The Farm happen. And the whole FEST family. Keep it dusty, I’m out.

You are welcome. Best of luck for you this year, I hope you can make it to all these places.

Heal up soon and see you at Laconfest. 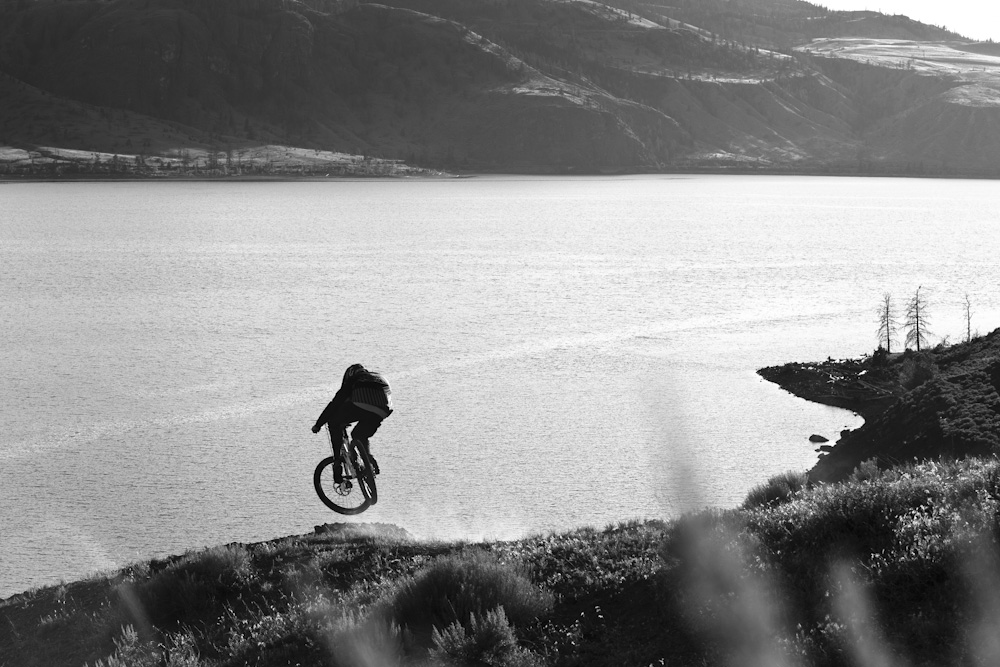